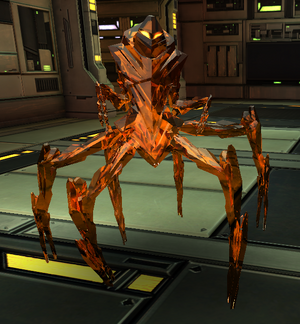 The Tholian Ensign is the most common rank in the hierarchy of the Tholian Assembly. It has the least seniority. Ensigns have no shields and they are armed with a Tholian Radiation Beam only.

Tholian Ensigns, without EV suit, have the basic orange carapace of their species. They are also smaller than higher ranking Tholians.

Tholian Ensigns appear in the Tholian Incursion ground map missions of the Neutral Zone: They are the most common troops encountered by Starfleet and the KDF when the Tholians occupy Nukara Prime to access the interphasic rifts there.