The Needs of the Many 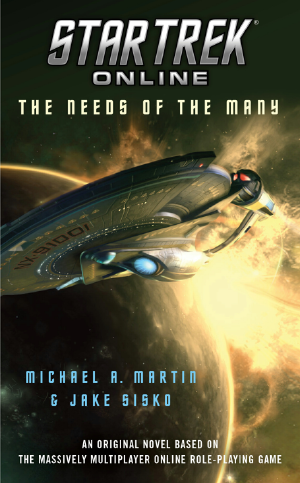 The Needs of the Many is an officially-licensed tie-in novel for Star Trek Online, published by Pocket Books in 2010. Written by Michael A. Martin from the perspective of Jake Sisko, in the year 2423, the novel provides backstory for the game's 2409 setting, summarizing events which occur up until that point.

Prior to the terror-filled times of the Long War – the seemingly endless struggle against the Undine, a paranoid, shape-shifting race once known only as Species 8472 – enemy sleeper agents quietly penetrated every echelon of Federation society, as well as other starfaring civilizations throughout the Alpha and Beta Quadrants. The ensuing conflict shook humanity to its very core, often placing its highest ideals against a pure survival instinct. All too frequently, the Undine War demanded the harshest of sacrifices and exacted the steepest of personal costs from the countless millions whose lives the great interdimensional clash forever altered.

Drawn from his exhaustive research and interviews, The Needs of the Many delivers a glimpse of Betar Prize-winning author Jake Sisko's comprehensive "living history" of this tumultuous era. With collaborator Michael A. Martin, Sisko illuminates an often-poorly-understood time, an age marked indelibly by both fear and courage – not to mention the willingness of multitudes of unsung heroes who became the living embodiment of the ancient Vulcan philosopher Surak's famous axiom, "The needs of the many outweigh the needs of the few".

Cast across the vast backdrop of Cryptic Studios' graphically stunning vision of a bold new century on the final frontier and beyond, The Needs of the Many adds a literary dimension to the immersive, massively multiplayer role-playing experience – Star Trek Online.