The Great Hall of Qo'noS (pre-Season 4)

The Great Hall of Qo'noS (pre-Season 4) 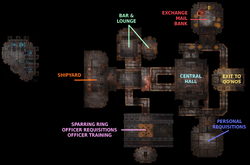 Map of The Great Hall of Qo'noS (pre-Season 4) interior.

With Season Four, this hub has been replaced by the Qo'noS capital First City.

The Great Hall of Qo'noS (pronounced Kronos) was the first Klingon hub that players of the Klingon Empire used. The Great Hall was divided into several sections. Each section held various NPCs who served different purposes such as: mission givers and requisition vendors.

In the Bar & Lounge area of the Great Hall players found a couple of weapons deals and various NPCs who were involved in Klingon missions and episodes.

The Exchange area was a room at the north-east section of the Great Hall. it held various non-integral NPCs. They will also find the Exchange, mail, personal bank and fleet bank.

The Central Hall was the main area that players beamed down into when they arrived from their starships. It's also the area that new players would first begin their career. Players could find various NPCs in this area. It also contained a ramp that lead up to Chancellor J'mpok.

A hallway gave access to Research & Development consoles for crafting. There were NPCs in the corner that sold items for energy credits:

The sparring Ring area contained multiple NPCs that could assist players with requisitioning new Bridge Officers and also training their existing Bridge Officers in new abilities. They all surrounded the main sparring ring which was involved in an early mission for Klingon players.

At the Shipyard section of the Great Hall players could find various NPCs that could: requisition new consoles, weapons, components and equipment, acquire new starships and customize their existing starships. There were also several consoles in this area that would allow players to view information on the types and configurations of Klingon vessels.

The personal requisitions area was a room at the south-east section of the Great Hall. In this area players could find various NPCs that aided the player in acquiring new weapons and equipment.