From Star Trek Online Wiki
(Redirected from The Great Hall of Qo'noS)
Jump to: navigation, search 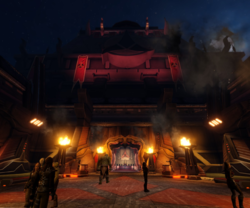 First City is the capital of the Klingon homeworld of Qo'noS and first Klingon hub that players of the Klingon Empire will use. With Season Four: Crossfire, First City replaced the old The Great Hall of Qo'noS-map as major hub for Klingon players.

The city is divided into several sections. Each section holds various NPCs who serve different purposes such as mission givers and requisition vendors. There are mail stations spread out in each quadrant of the city.

This is the room you are first in when you beam down to First City. Here, you can also beam directly to the Shipyard, beam down to Klingon Academy, or return to your ship in orbit over Qo'noS.

The Great Hall includes the Klingon High Council, the ruling body of the Klingon Empire. It is located on the northeast portion of First City.

At the northeast part of the barracks, you can enter the Warriors Hall.

The Challenge Floor with the Great Hall in the background

This area contains a sparring ring similar to the Warriors Hall as well as a marketplace.

This room on the northwest contains a blood wine fountain and a balcony with singing Klingon captains.

This area is in the northwest of First City.

The Forge was home to Klingon crafters

The Targ pits near the forge

The Forge, in the southwest, contains a targ breeding pit and Bat'leth forges. Towards the west are the slums. It was previously the KDF's equivalent of Memory Alpha, serving as a crafting hub. That activity is now wholly within the UI.

An alleyway in the slums

Explore the troubled and dangerous alleyways of First City. 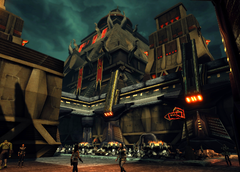 Cityscape near the courthouse

This area in the southeast has banks and an exchange. It is also home to the courthouse and the prison complex. 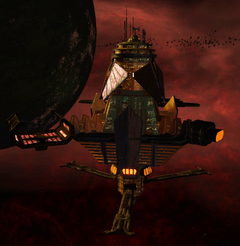 The Shipyard in orbit over Qo'noS

View from the Shipyard

This Shipyard can be accessed from orbit over Qo'noS or from the transporter pad in First City.

At the Shipyard section of the First City map, players can find various NPCs that can: requisition new consoles, weapons, components and equipment, acquire new starships and customize their existing starships. There is also a console that will allow players to view information on the types and configurations of Klingon vessels. 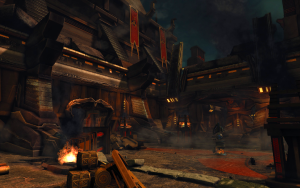