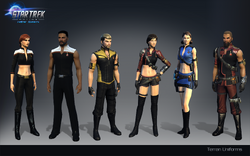 Ground Forces of the Terran Empire

The Terran Empire is a state of the mirror universe, a parallel universe that exists on a different dimensional plane. Using force rather than diplomacy, the Terran Empire is the counterpart of the United Federation of Planets and a military dictatorship ruled by an Emperor.

In Star Trek Online, it is a non-player faction, using most of the same military assets as the Federation with cosmetic differences.

Emblem of the Terran Empire.

The Terran Empire was forged in several brutal wars. Treason and oppression are considered warranted means of advancement through the Empire's ranks. The Humans of the mirror universe (typically referred to as "Terrans") are openly nationalistic and fascistic, deeming themselves the born master race.

Terran forces from the 2250s

Human literary works as far back as the 16th century show a divergence, except for Shakespeare. However no point of divergence from the Prime Universe has been established. The founding date of the Terran Empire is also unknown, but in 2155 it was said to have existed for "centuries" (suggesting at least the 20th century) and Roman-like allusions have been made by Terrans.

In 2063 Zefram Cochrane killed the first Vulcan to set foot on Earth with a shotgun. The Terrans looted the Vulcan ship and reverse-engineered its technology. The Terran flag is subsequently planted on Luna (by an astronaut in a 22nd century spacesuit) and Terran forces rapidly conquered Vulcan, Andoria, Tellar Prime, Denobula, and Gorlan by the 2150s.

In 2155 Rebels from oppressed worlds were on the verge of breaking the Empire's rule. The Empire was near total collapse until the I.S.S. Enterprise managed to capture the U.S.S. Defiant (a Federation Constitution-class starship from the 23rd century), again infusing the oppressors with new advanced technology, giving them the advantage necessary to foster their dominance.

By 2256, the thriving Empire had rendered Qo'noS uninhabitable, but still faced opposition from rebel forces; an alliance of Klingons, Vulcans, Andorians and Tellarites who were opposed to the Empire. Many of these rebels were, however, wiped out by the Emperor's flagship. The Emperor however subsequently disappeared in a coup attempt, and the coup leader and his forces were killed when the Emperor's flagship were destroyed.

A transporter accident in 2267 resulted in an exchange of personnel between the Prime and Mirror universes - the Captains of the U.S.S. Enterprise and the I.S.S. Enterprise travel to their counterpart's ships. Prime James T. Kirk was able to convince mirror Spock that the barbaric ways of the Empire need to change.

Spock subsequently rose to become Commander-in-Chief of the Empire and began to implement a policy of change (peace and disarmament). Unfortunately these reforms also weakened the Empire and made it vulnerable to conquest by the Klingon-Cardassian Alliance. The Empire fell, and Terrans and Vulcans became a slave caste of the Alliance.

In 2372, inspired by their prime universe counterparts, a group of Terran rebels working on Terok Nor (DS9's mirror counterpart) manage to take the station from the Alliance. Using stolen plans for the Defiant-class escort, the rebels build the I.S.S. Defiant and succeed in pushing back Alliance forces.

The Terran Resistance in the Bajor Sector eventually spread through the rest of the Alpha and Beta Quadrant, eventually forming a Second Terran Empire. By the 25th century this Empire reverted to its original aggressive nature, ruling oppressively over its territory and initiating a series of hostile incursions into the prime universe. The new emperor rose to power after a strange encounter gave him god-like powers.

In 2409, Terran forces begin providing aid to True Way forces and the Empire begins a major incursion in the Badlands. Around the same time, the Orb of Possibilities is returned to mirror Bajor, aiding the rise of Captain Leeta. The following year, Admiral Leeta defeats the Iconians 200,000 years in the past and takes challenges the Emperor's power using a combination of future technology from the Temporal Liberation Front and aid from the Pah-wraiths. ( “Message from Another Universe V”)

In 2410, the I.S.S. Discovery was displaced from the 23rd century and led to Captain Killy seizing Pahvo. While her plans were thwarted, and the Discovery returned to the past, Killy remained at large.

Terok Nor and Leeta of the Terran Empire

The military arm of the Terran Empire is Imperial Starfleet, which mostly consists of Terrans. Ships in Imperial Starfleet are similar to their Prime Universe counterparts and may have been created from stolen plans. Unlike these however, most Imperial ships are capable of cloaking. Instead of the 22nd century vessels which were adorned with yellow markings, 25th century starships utilize red markings instead. Additionally, Imperial ships use an "ISS" prefix (Imperial Star Ship) instead of the prime Starfleet's "USS" (United Star Ship).

The Empire is known to constitute members of the following races: