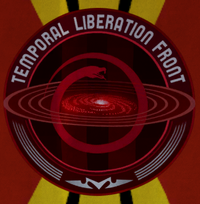 The alliance's logo, as seen in Temporal Reckoning.

The Temporal Liberation Front is a multi-species alliance dedicated to proactively using time travel to increase their power and restore lost status. They the Galactic Union, its 25th century predecessors (Federation, Klingon Empire and Romulan Republic), and other signatories of the Temporal Accords which ban attempts to alter the current timeline.

From the logs uncovered from a shielded data-core, Noye learned about the original timeline which ceased to exist when the Annorax. In that timeline, he had a wife and an unborn child. Blaming the Alliance from the Beta Quadrant for their demise, Noye started searching for surviving Tuterians, hoping that one of them might be Clauda. Desperate, he began seeking revenge, believing that the only way to bring her back is to destroy the Federation.

After stealing the Annorax from the Kyana Research Station in 2410, Noye activated the temporal shunt drive and escaped into unknown.

With the support from Tuterians, who became known as Sphere Builders, Noye traveled to 2769 where they tried to stop the signing of the Temporal Accords at New Khitomer, hoping to inflict a heavy blow to the Galactic Union. However, with support from the 25th century, Benjamin Walker of U.S.S. Pastak successfully rescued hostages and secured the system. Noye's mission wasn't a complete catastrophe, as it got him in touch with the Na'kuhl - potential allies. Na'kuhl, who protested the signing, tried to use Noye's attack to destroy the Temporal Sensor Array, which would allow them to plant thousands of their agents throughout the timestream without a way of getting caught.

Wanting to retaliate, Noye returned to Kyana System in 2410, just moments after his escape with the Annorax, and attacked the Pastak and another Alliance vessel which ruined his plans at New Khitomer. When the rest of his fleet was destroyed, Noye escaped again.

At some point in time, as a result of multiple defeats he suffered at the hands of various temporal agents, Noye started suffering from a condition which caused various parts of his body to exist in different temporal states. Scarred and disfigured, he started operating under the codename Envoy. With Na'kuhl already by his side, Envoy started searching for other potential allies who considered Federation and the Alliance a threat as much as he did.

After failing to steal the Tox Uthat from Risa in 24th century, Envoy, in a show of good faith, revealed to Vorgons that Tox Uthat was being kept on Earth at a secured location. Vorgon commanders Boratus and Ajur used this information to infiltrate Earth during a Breen attack in the Dominion War, but showed no interest in joining his movement. When an Alliance officer, with the assistance from a temporal agent Daniels, killed Ajur to prevent the two Vorgons from taking the device, Envoy promised Boratus a chance to have his revenge, persuading the grieving Vorgon into joining him.

Vessels of the TLF

Although Sphere Builders supported him during the attack on New Khitomer, they didn't join his movement until an Alliance officer disrupted their operations in an alternate timeline. By then, his movement became known as the Temporal Liberation Front and their primary mission became the liberation of time travel.

Envoy and his allies fought their battles throughout the centuries, fighting the Alliance before it even existed, targeting its members in specific moments of their histories in attempt to change the future and prevent the formation of the Galactic Union.

One such battlefield was in 2260s, crucial years for the Federation. Envoy and the Na'kuhl attempted to destabilize the Federation by arming its enemies, such as the Klingons, Romulans and Orions.

In 2270, a cloaked Romulan warbird destroyed a Gorn starship in orbit of Edren IV, almost putting an end to the joint Federation-Gorn mining operation on the surface. The Gorn blamed Starfleet, and battle ensued, but a Starfleet captain managed to find proof of Romulan involvement, preventing the situation from escalating.

Following the failed attempt at Edren IV, the Na'kuhl decided to step up their game. They infected the Starfleet crews stationed on Deep Space K-13 with Denevan Neural Parasites and took control of the station. While their plans were again thwarted by the same Starfleet captain who stopped them before, DSK-13, with some of the officers aboard, was ultimately pulled into a spatial anomaly and lost to time.