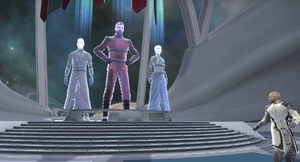 The Temporal Accords are a series of agreements and restrictions regarding the use of time travel. The treaty was signed at New Khitomer in the year 2769 by the members of the Galactic Union.

The Accords were signed or supported by the following powers;

The Tholians, however, wanted it to go further, to ban all time travel for any reason. It is unclear which powers are still independent at the time of signing with some in the Galactic Union, and some even a part of the Federation.

The accords were opposed by the Krenim and Na'kuhl, who formed the Temporal Liberation Front along with the Tuterians, Vorgon and Terran Empire