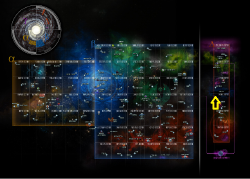 The Tekara System is a system located in the Devore Sector of the Delta Quadrant.

The Tekara system features three stars - two neutron stars orbiting a much larger class A light blue star. Astronomers believe that neutron stars were once part of another system, but after a supernova their orbit drifted until they caught in the gravity of the Alpha Tekara star. The arrival of the twin neutrons changed the orbits of Tekara Prime and Tekara II, turning the once L-Class worlds into Y-Class "demon" planets.