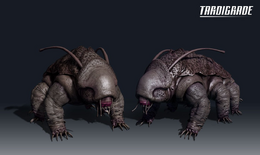 The Tardigrade, caught in a firefight, taking down Klingon boarders

A Tardigrade is a sentient, multi-dimensional creature whose unique genetic makeup allows it to navigate the Mycelial network by incorporating Prototaxites stellaviatori DNA in its genome through horizontal gene transfer. While it only fights in defense, its strength and resilience is formidable.

Its exact origins are unclear, but it came aboard the U.S.S. Glenn due to their stored supply of Prototaxites stellaviatori. After the loss of the ship, it was taken aboard the U.S.S. Discovery before being released.

The term Tardigrade is an informal one, as it shares characteristics with the Tardigrade of Earth. It was also given the name "Ripper" by Commander Ellen Landry. It was referred to as "the specimen" by Justin Straal.