On Tribble, many older ships are getting consoles (NX, T3/T5 Excelsior & Nebula, Galaxy-X, Galaxy-R, Intrepid-R, Defiant-R). There appear to be some bugs for the Holodeck character transfers. I have not checked the KDF ships yet. --MatthewM 00:36, 20 October 2011 (UTC)

Wow. Given how many of these there are now, do you think it would be better to put each one on its own page, and just make this a listing page? Maybe a table mapping console, to effects, to the ship you get it from? Also, I really wish the cloak console could apply to my MVAM Escort! I'd pay 1,000,000 Atari Tokens for that! :D --Zutty 09:56, 20 October 2011 (UTC)

That may be a good idea, it should be similar to what you'd see on say, Engineering Consoles page. Note that this page still hasn't been updated for the new Akira and Ktinga refits. --MatthewM 14:21, 20 October 2011 (UTC)

So far special ability consoles are limited to the ship they came from or others with the same ability, like the Defiant cloak is limited to the Defiant-r and the Gal-x, and versa-vice.--Noram 15:54, 20 October 2011 (UTC)

I uploaded the missing images for the consoles listed, if I remember I'll also add in the missing consoles from the descriptions area tomorrow. --Lord Trekie 06:47, 11 December 2011 (UTC)

Correction, the console I have is Console - Universal - Transwarp Computer, not sure if this is the same console or not, its stats are different. See 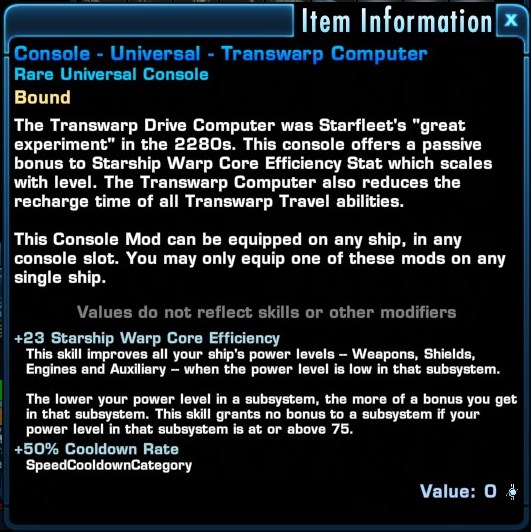 Just checked the C-Store via the website, according to the descriptions, the T3 Excelsior comes with the Transwarp Computer console I listed above, the T5 has the Advanced Transwarp coil, there's no standard Transwarp Coil. MikeWard1701 08:35, 16 March 2012 (UTC)

Split into / move to subpages?[edit source]

Given the grown number of available universal consoles wouldn't it make sense to move most of the info to subpages at this point? Not that I wrapped my head around how to split them yet, just noticed that the article is rather large. --Dukedom 09:06, 22 January 2013 (UTC)

I second this, for reasons stated here, and above, as well as to allow templates to work such as {{item|Console – Universal – Dynamic Tactical System||rare}}. In the case of that particular example, it has already been used in the Daeinos Heavy Destroyer article and someone has created a redirect page for it which lands here. I'd much rather see the information on its own page than have to load all of this and scroll.

Re: "how to split them"... I think the above is a good example. The pages need to be named as the item is named in-game so that existing templates work as expected.

As for the list itself, I personally prefer the use of categories, which are in effect a "self-building" or "dynamic" list. My concerns with a manually edited list is that it can get out of date if people dont keep manually adding links to pages in other places, all of which could be found by search, or by browsing the appropriate category. Case in point: "List of vendors buying at 50%", where I added a reference to the category, since it had more vendors in it than the list ever had. --Tahno (talk) 15:11, 19 September 2013 (UTC)

I started doing this back September 2012 / last year - so these two list are quite out of date and by no means complete (even for 2012). I was in the process of compiling the list together. At some point I may get round to completing the list - but there's a lot of new consoles added. I'm sharing the links below in case anyone wants to use them for anything - be it browsing, finishing them or creating a new list (in case I never finish them):

I've gone through and made a complete up-to-date (6th Nov 2013) list of all the Universal Consoles, as well as where to get them, what you can equip them onto and a brief description of what that do. You can find the list at: User:Sunnynova/Universal Consoles List. If you have any comments or suggestions please let me know.

Two problems: 1. There's no much info available on some of the consoles: mainly the Romulan ones and Elachi. 2. Ideally consoles on the current Universal Consoles page need to be moved to their own pages before I copy and paste the list across to here.

It's definitely a lot of work but the universal console page does need to be updated. I haven't had a chance to look at it but its certainly on the list as I'm sure its on others but its a huge undertaking. Asanad (talk) 18:12, 13 November 2013 (UTC)