Can anyone please expand the Intro with some basic infos? How do you use a Tribble? Is it consumed in the progress? --Dratir 09:12, 2 February 2012 (UTC)

So I added the Cryo Tribble to the wiki (thanks to whomever added the screen shot). I added it under special, but I'm wondering if maybe it belongs as a Tier 6 or something else. It's not like the Borg and Undine Tribble, or Riv for that matter because it can be received by anyone. What think you?

Oh Can someone properly link the two missions I've referenced? I'm new to wiki editing and can't figure it out. BrooklynKnight 00:41, 14 September 2010 (UTC)

Players participating in the Tribble (Server) Test Weekend are rewared with the "Fluidic Space Tribble". I can't rip the icon of it, though. Is a screenshot okay? Markonian 14:47, 13 August 2010 (UTC)

I added both these tribbles to the special list, as well as uploaded the icons for them, hopefully all is well with that. --Lord Trekie 16:45, 10 December 2011 (UTC)

Dukedom gets critically hit by wall of text

Tribbles breed every hour, on the hour, after you've started playing the game.

Should this not read "Tribbles breed every two hours, on the hour of odd-numbered hours, based on your character's playing time"? Divycom 10:03, 26 December 2011 (UTC)

I am honestly shocked that something as huge as who can use Tribbles isn't listed on a wiki page dedicated to a usable item. Especially being as that is 50% of the population. Obviously I know that Klingons can't. I also know that Orions can. Which leaves me wondering if Gorn or Nausicans can and if there is any special allowance for Klingon BOffs. Alas, the reference material for this very subject has failed me. 67.172.133.196 18:44, 31 March 2013 (UTC)

Hello, I recently ran into someone who said there was a tribble breed that was called "Daring Tribble" It is bred by using any tribble and combining it with Cream Soda Its Stats are the following: "Targets Self 1.25 sec activate 6 sec rechargeRemoves all previous Tribble buffs for 3,600 sec:

It is an Epic Ground Device and is max of one per character It is automatically bound to character as soon as it's bred. I just thought that it should be added into the database. 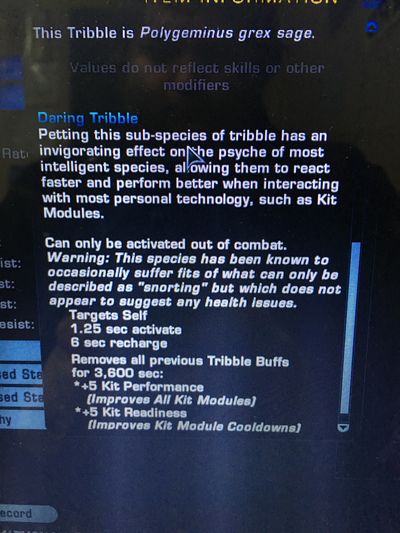 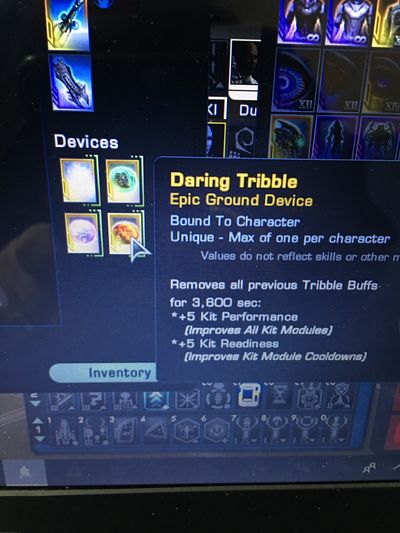 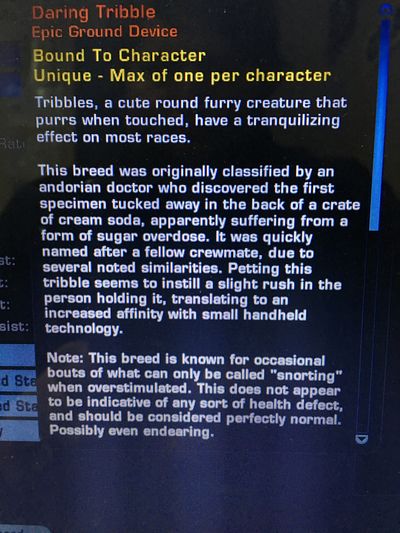