As mentioned in the article, only the Pioneer, Class F shuttle and (if owned) the T1 Constitution are normally available to players in the TOS faction. However, should a player choose to remain in the 23rd Century and continue to rank up, cross-faction Event Reward ships do become available from the Reputation Store at the appropriate rank: 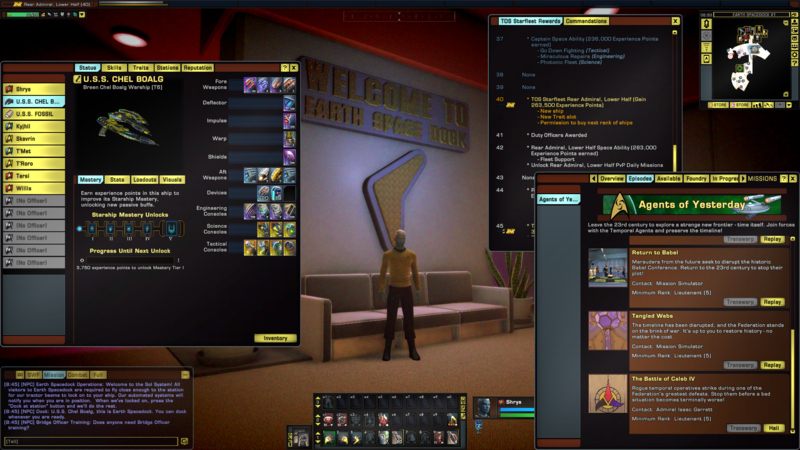 NOTE: Doing the above is very similar to playing a "Permanent Pre-Searing Character" in the first Guild Wars game.
-- Tekn0mancer (talk) 14:55, 30 September 2018 (UTC)

Obviously as we have the Disco faction, it doesn't make much sense to call this "23rd century" anymore. Although we have a few different naming conventions popping up across the wiki that broadly revolve around it being TOS/DSC or 2250s/2270s. The date version probably looks cleaner, although it is clearer as to what we mean if we use the series name (not everybody would know 2270 means the TOS faction).

Using initials is probably better, as while Discovery is fine to spell out, The Original Series isn't and we ought to be consistent. So;

Or "Starfleet (TOS)" if that is closer to the original link. But the same naming convention should be wiki-wide.

Naming of the 25th century faction is a whole different argument. I'm inclined to have it following the same convention but (TNG) is inaccurate and (post-TNG) perhaps isn't any clearer than (25th century) so probably best to leave that for now.

Unless we're feeling adventurous; there is probably an argument for splitting information about the Federation from its factions and using something closer to the ingame faction naming. So;

Given potential scale of that change, I'm not inclined to put a lot of work into it without people being onboard with it as I don't want another case of the debate only starting after I've done most of the work. So I'll leave this here for atleast a week and see what people think.Scientifictheory (talk) 11:03, 4 November 2018 (UTC)

If it absolutely needs to be done, I'd lean toward using the same faction-specific naming conventions used in-game.
Here's what the character creation screen calls them (click to embiggen):

Regardless, there will probably need to be at least a few disambiguation pages generated for the reasons you state above. And let's all just try to forget the whole prime/alternate timeline complicated tangle, ugh. -- Tekn0mancer (talk) 14:45, 4 November 2018 (UTC)

I also favor using the in-game faction names. Our 25th century Starfleet is the default, unlike DSC and TOS Starfleet. That way, we could also treat "Starfleet" as meaning both 25thC Starfleet, and Starfleet in general, depending on context. Kind regards, Markonian (talk) 18:53, 4 November 2018 (UTC)