Because of his former (and arguably best-known) position as Chief of Security on DS9 and involvement with the Bajorans, should Odo be classified as "faction = Federation" or, because he's currently (since the end of the Dominion War) part of the Great Link and thus involved in the Dominion's leadership, would "faction = Dominion" be more appropriate? --Turbomagnus (talk) 19:42, 28 May 2016 (UTC)

He was associated to Bajoran militia before they were part of Federation, so Dominion faction is probably his current allegiance. --Damixon (talk) 23:19, 21 November 2016 (UTC) 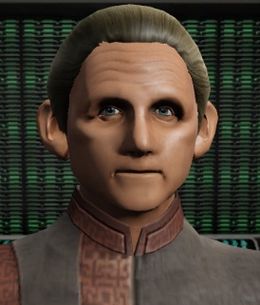 I don't know how important it is, but it sounded for all the world like Odo's voice was am archival clip from DS9, especially since we would have heard SOMETHING about Rene Auberjonois returning to voice him. Carguy1701 (talk) 06:38, 24 January 2018 (UTC)

Yeah, I think so as well. They probably got him for the next expansion, but wanted to keep it a secret, so they used the audio from DS9.

I don't think it was quite about keeping it secret - they've kept people underwraps until the episode launch before. It would be more that they tend to record VO late in the production process (likelihood of dialogue changes) so he won't be booked in the booth until they're wrapping up work on the FE's he is actually featured in. It's nice to have a suprise in FE thought, rather than a blog announcement.Scientifictheory (talk) 08:50, 24 January 2018 (UTC)