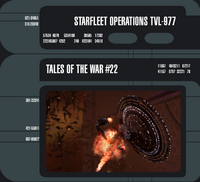 “To K’mpec, son of Rorg, and Ktala daughter of Mudj,” Kagran intoned, trying to inject some inflection and emotion into what had, upon his 534th repetition, become a rather rote recitation, “I am pleased to inform you that your son, B’ijik, died an honorable death in battle, and will assuredly have a place in Sto’vo’kor. He died-“

Tom Paris walked into Kagran’s office. Spartan by Klingon standards, Kagran had only a couple small trophies displayed and a single Klingon Defense Force banner behind his desk.

“Captain Paris, thank you for coming.”

“I make it a point to personally notify the families of fallen warriors under my command, if their commanding officer cannot. I have had some difficulty composing condolence letters to the families of the Federation troops that have fallen. The Klingons, and to a lesser extent, the Romulans, understand the value of a glorious death. But your Federation species… you do not share the same values.”

“To Fred and Mary Johnson: While I regret to inform you of the passing of your son, William, I am pleased to inform you that he died an honorable death in battle, and will assuredly have a place among your honored dead. He died aboard the U.S.S. Surat with all hands after a pitched battle at the Iconian Sphere, due to a warp core breach. Although he managed to reach an escape pod, its mechanism jammed upon launch and he was no doubt incinerated in the plasma explosion. We drink a toast to his memory and I congratulate you on your son’s achievement.”

“Oh boy. I’d hate to hear Kagran-231-Alpha. Well, for starters, dying a glorious death is not intrinsically a good thing to our people. But sacrifice, for a larger cause, can be a good thing. These parents are going to be grieving, and if you want to help them, give his death some meaning beyond the act itself. What did this William Johnson achieve by his death?”

“Well, nothing, really,” said Kagran, “He died at Iconia, as part of our attack on the Iconian Sphere. Which I’m sure you remember all too well.”

“It haunts my dreams. I lost a lot of friends that day, not least of which was Guroth.”

“Then you remember my desperate plan for an all-out attack resulted in the loss of more than half our fleet.”

“We did manage to kill M’Tara.”

“Yes, who may have turned from the path of vengeance when we returned the World Heart, as L’Miren did. I saw no other options at the time. But looking back now, we could have played a waiting game, drawing out the conflict until our weapon was ready.”

“And they could have destroyed Qo’noS, Earth, or New Romulus in the process. On the other hand, we united the entire galaxy, perhaps for the first time. We kept things together, defending what we could. Yes, we made hard decisions, and those decisions resulted in a loss of life, but without your leadership we never would have reached the point of going to the past, and without your compassion we would not have achieved victory.”

“Klingon Loremasters do not sing songs about compassion.”

“Well maybe they should, because compassion won this day. And William Johnson gave his life, the ultimate sacrifice, to give us that opportunity. His parents lost their son, and they want that loss to mean something.”

“Very well. I shall try again.”

“Oh, one more thing, Captain. Maybe go a little easier on the details.”

“His parents do not wish to know the circumstances of his death?”

“No, they do, in general terms, but Federation species tend to be a bit more squeamish than Klingons about the blood and guts part.”

Kagran sighed loud and long, ending the sigh with a muttered utterance that sounded to Tom like “milk-drinkers.”

“To Fred and Mary Johnson. While I regret to inform you that your son William has died, you should take comfort that his death helped lead us to the day that we could go back in time and retrieve an object that ended the Iconian war. So, in a sense, we were standing on his corpse when we went to the past. He died with all hands on the U.S.S. Surat at the Battle of Iconia, likely due to a plasma discharge. Such discharges are so hot and so powerful, they usually cause instant death with very little pain. While we were unable to retrieve his body for burial, rest assured that his remains float through space with his fallen comrades.”