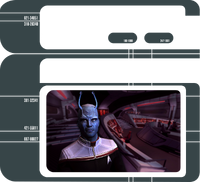 Captain Va’kel Shon regarded the map with a frown. The wall display was configured to show the current state of the Alpha and Beta quadrants. Iconian forces were picked out with grey icons across the map, like sharp teeth, tearing into the Alliance.

“There must be another way,” Shon said to himself, eyes tracing over the newest systems to fall under the Iconian banner. During conflicts with the Borg, the Collective swept forward like a great tide. The Iconian war had a more abstract concept of a “front line” thanks to their gateway technology, but it was certain they were heading for Earth.

“Captain,” Commander Philipa Matthias greeted as she stepped into the room. She glanced at the display, lips tightening slightly.

“Did you need something, Counselor?” Shon asked, hoping she would be brief. The Enterprise would be leaving for the final Kyana briefing at 0800, giving him little time to work.

“Galactic peace would be lovely, but I think you’ll agree that’s unlikely at the moment, so I would be satisfied with a cup of tea and your ear for the time being,” Matthias said.

Shon eyed the human woman for a moment then stepped to the replicator, calling up a Vulcan blend he knew she was partial to, and a small raktajino for himself. Matthias sat on one of the more informal couches and sipped her tea for a moment in silence. Shon sat across from her with a small resigned sigh.

“I am making the rounds with everyone,” Matthias said over the rim of her mug. “Just so you don’t think I am singling you out, Sir.”

“What’s the mood of the crew?” Shon asked, more comfortable with this as a business meeting. He had too much of the future on his mind to be digging into personal tragedies of the past – as ironic as that was given the current situation. They were facing the hardest battle yet. Possibly the last battle.

“Frightened,” Commander Matthias replied without hesitation, “but they are trying to keep it in check. They’re looking to the senior staff for guidance.”

“And how are my senior officers, Counselor?”

“Looking to you, Captain,” she said, contemplating him. “So the question is, how are you? I am under the impression you’ve had some reservations.”

Shon’s antennae twitched in short, sudden anger. Philipa arched a grey eyebrow, sipped her tea and waited patiently for him to answer.

“You’ve seen the reports, Commander, and you’ve seen the same maps I have,” he said, gesturing to the display. “We’ve little choice but to move ahead with the plan. Quinn, Jimpok and D’Tan signed off on it. The Alliance fleets are all in motion. We’re committed. The Enterprise will be there to defend the Federation.” To the last, a small inner voice added. If only there was another way…

Caught off guard, Shon chuckled. “That she is. She’s bet both Tiaru and I that the Bortasqu’ will personally defeat more Herald ships than the Enterprise and the Lleiset, combined.” Shon shook his head and looked out the window at the gathering fleet; at once it was the largest he’d ever seen and it was too small. “She won’t lack for targets based on what intelligence believes.”

“You don’t agree with Kagran’s final plan,” Matthias said, abruptly changing the conversation’s direction back to him. “I am ship’s counselor; I‘m here for you to speak with as well.”

Shon’s antennae twitched and he gave her a cool look. “The Enterprise will do her duty,” he said, “and so will I.”

“That is never something I have ever questioned, Captain. You’ll go along with the plan, but you don’t agree with it. Do you think it will fail?”

Shon set his drink aside and stood before the window, clasping his hands behind his back. “Even the best plans can fail, Counselor. No, my objections are…” he paused, looking for a word before finally settling on one. “My objections are deeper.”

He turned to face her. “When I joined Starfleet, I took an oath to uphold the Federation’s ideals and values. Too much of this flies directly in the face of that. We’re facing certain death, but if we win in this way, will we have killed something core to the Federation? If we take these actions, will we be damning ourselves anyway?”

“You are concerned for the soul of the Federation?” Matthias asked.

“It will be easier a second time. Easier still a third. The door will have been opened.” Shon walked back to the tactical display of the quadrants as he spoke. “I’ve spent the last few days trying to come up with an alternative.” He shook his head. “They’re too numerous and too powerful. The best case might have us survive a few months, but then we’ll be overrun.”

“I don’t think we’ll instantly jettison the Prime Directive if we survive the next few days,” Matthias said, answering some of Shon’s darker, unspoken thoughts.

Shon looked over at her.

She shook her head, shoulder squared. “We have too many good people to let that happen. I count you chief among them, Captain. That said, you are the commander of the Federation’s flagship. That places you in a special position. If you have reservations, you’re in a position to speak up and be heard.” She rose and set her teacup in the replicator. “As someone who shares your reservations, for the same reasons, I would be grateful if you’d give us a voice.”

Shon studied her then nodded. “I’ll do my best, Counselor.”

“Thank you, Captain. With your permission I’ll let you get back to your work. If there is an alternative plan, I hope you will find it.”

Shon nodded and turned to regard the map once more as Matthias saw herself out. Another icon flashed silver, another system held by Herald forces. “As do I, Counselor,” Shon said, “as do I.”