Tales of the War/2 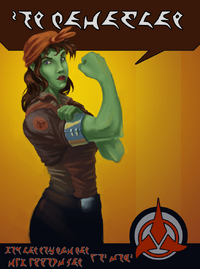 I have a few minutes before they call us to load the transports.

A few minutes to sum up a life.

I am not afraid to die. I knew from the day I stepped onto the Academy grounds this would be my fate. And I will die defending my homeworld. There is no greater honor for a warrior.

There are so many things I have never done. I never rose to command my own ship. I never heard my name proclaimed with honor in the Great Hall. My dreams of founding my own House will die with me.

But I have fought side-by-side with my brothers and sisters in service of the Empire. I have spilled my enemy's blood on the sands of Nimbus III. I have served my captain well, and I have felt the heady rush of glory move through me like the strongest bloodwine.

Before I entered the Academy, I spent a year in the frozen monasteries of Boreth. There I learned about the Klingon gods, beings of great power who thought they could rule us.

Our ancestors rose up and slew the gods. Afterward, they held their bloody blades up to the sky and proclaimed that they were Klingon!

The Iconians think they are our gods now. They will meet the same fate.