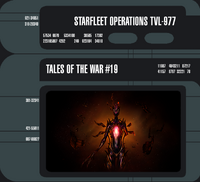 The patient, a Bekk named K’rat, stirred and began to mumble, “No, let me pass over to Sto’vo’kor.”

“Not today, I’m afraid,” Hazra-Kull said, “The Empire still has need of your services. Nurse, pass me –“

Sick bay rocked with the force of an impact, and the lights went down. Harza-Kull let loose a string of curses in several languages in the darkness, before the emergency lights came up, even redder than the regular ruddy light on the Bortasqu’.

“What? We’re in battle again? I’m not even done patching up the last group,” Harza-Kull said.

“It’s the gateways, Doctor. The Heralds can be anywhere at will,” Koren said, “And they’re not slowed down by doctors who complain when they should be treating patients.”

Harza-Kull grunted his frustration and snatched a dermal regenerator off the instrument tray. “No time for a thorough job, I’m afraid. We need you back at your station, K’rat. You’re going to have one serious scar.”

Just as he finished closing the incision on K’rat, a team of four crewmen brought in three wounded warriors.

“Put them on beds four, five, and six,” Harza-Kull, already visually assessing the first patient, turned back to Ch’droth, “Nurse, administer 20 ccs of inaprovaline to Bekk K’rat and send him back to work, we’re going to need the bed.”

Harza-Kull completed a scan of the first patient, who was unconscious, “Severe plasma burns, possible concussion, multiple contusions and fractured ribs. He’ll live, but he won’t be fighting any time soon. Give him some 20 ccs of Triptacederine and monitor his vitals.”

The second patient, Lieutenant J’sac was still awake, but in shock. His left arm was severely burned. “What happened, Lieutenant?” Harza-Kull asked, mostly to test J’sac’s mental state – he could smell the ozone characteristic of an electro-plasma discharge the moment the Lieutenant entered his sickbay.

“We were hit by a torpedo, sir, and the EPS conduit ruptured,” the Lieutenant stammered, trying not to show the pain of his injuries in his voice.

The third injured crewman was so badly burned that he was barely recognizable. It was only by comparing a scan to the medical records that Harza-Kull was able to identify him as Bekk Orrad, just out of the academy on Qo’noS.

Triage on a Klingon ship was complicated under the best of circumstances. On another ship, under different circumstances, he would have tried to save the young man. But his injuries were so extensive, it would take hours to stabilize him and then weeks of recovery before he was fit for duty. Meanwhile, he could amputate J’sac’s arm, pump him full of stimulants and have him back at his station in half an hour.

And in a war like this, that officer could mean the difference between the deliverance and the destruction of the Bortasqu’.

Harza-Kull turned to Nurse Ch’droth and said quietly, “Well, if I had more time I could save the arm, but we need him back at his station. Nurse, prepare the Lieutenant for amputation.”

“Sir, isn’t that a little extreme? You know how we Klingons feel about such injuries.”

Another explosion rocked sick bay. One of the uninjured crewmen lost his footing and knocked over a tray of instruments.

“That’s it,” Harza-Kull barked, “Out of my sickbay. We’re in the middle of a war, go fight it. And leave me to my own battles.”

Harza-Kull turned back to the third patient, fruitlessly racking his mind for a way to save the young warrior. The cruel calculus of the situation left only a single solution.

“One more for Sto’vo’kor, Nurse. Give him something to ease the way and then get back to prepping the Lieutenant.” She didn’t argue. In fact, Harza-Kull caught a look of envy in her eyes that he found disturbing. Ch’droth was a competent, if uninspired, nurse. He knew that she longed to prove herself in battle, but lacked the physical prowess. For her, nursing was a way to serve the Empire. Sometimes, though, it seemed she’d just as soon send all the wounded to Sto’vo’kor, at least the Klingon ones. For their benefit, of course, but her Klingon appreciation of a glorious death made him uncomfortable.

His job, meanwhile, was to patch them up and send them back into battle, and to make difficult decisions about who was to live and who to die. It was small comfort that, given the choice, this young warrior would likely choose to die and guarantee his place in the afterlife. Harza-Kull would have chosen to live. In fact, he would force every single one of them to live, if he could make the choice for them. Let them die of old age and go to Greth’or with the dishonored dead. At least they wouldn’t be on his conscience.

“More? I’m running out of beds down here, Captain.”

“I will ask the Heralds to pace themselves, Doctor, and give you a chance to catch up,” Koren said.

“Ah, that famous Klingon wit. With that and some more biobeds we might be able to keep your stations manned long enough to win this war,” Harza-Kull said.

“Cheer up, Doctor. Today is a good day to die,” said Koren.

“I don’t know about a good one,” Harza-Kull said, “But it’s proving to be a popular one.”