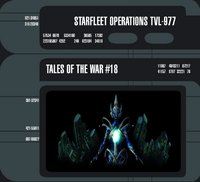 I hope this letter finds you to be in optimal health. I am functioning within normal parameters. As indicated by the informal greeting, I find myself in need of the guidance of Kathryn Janeway, my friend, not Admiral Janeway of Starfleet.

You are aware of the Krenim Project and its stated goals. We are making efficient forward progress, however, I find myself having reservations. It has become apparent we can build this weapon, but the question for me is if we should build it. I have noticed that among my Krenim colleagues there is a disregard for the potential consequences related to our work.

The acquisition of new technology and the progress of knowledge is, and has always been, pleasing to me. We are also moving at an efficient pace. It is curious that despite such optimal circumstances I would feel such disquiet. I posit it may be my intimate familiarity with the statistical dangers that has tempered my desire to push those boundaries. The consequences of the technology, if actually deployed, are vast.

I am uncertain how to proceed.

Thank you for the swift reply. I have attempted to follow my instincts as you suggested and I believe I have made progress. The presentation of the inherent dangers of time manipulation was well received in general. Captain Nog also appeared to be appreciative of my concerns and has been using it to curb some of the more enthusiastic members of the Krenim and Romulan delegations. However, the lead Krenim researcher, Noye, seems to think this is more interference by "The Voyagers." I attempted to explain that his dismissive nomenclature does not carry a negative connotation for the members of the Alliance, but he has chosen once again to ignore my factual data in preference of his personal goals.

I find myself hoping for the success of the mission to assault the Iconians’ Dyson sphere stronghold. This technology is powerful and poses many intriguing questions to science, but it is also the single most dangerous weapon I have personally encountered. The more we discover, the more I find I would rather not see it deployed.

I have been reminded of when we debated the merits of Omega. I believe I have a more full understanding of your position during that time.

By now you will have received word of my request for transfer away from the Krenim project.

It was a difficult decision to make, especially in light of the recent Iconian counter-attacks, but I feel it is correct. The more we discovered, the more simulations we ran, the more complexities were revealed.

I helped to develop a recursive technique to anticipate organic variance by over sixty-seven percent, but I feel it is still too inaccurate. According to my projections even accuracy rates into the ninety-fifth percentile could carry catastrophic surprises. For one example, at the ninety-fifth percentile we could see Zefram Cochrane became an agronomist and First Contact on Earth be delayed by more than a century. The ripples from that single change are countless, and while many are small, too many have greater implications we cannot account for.

Researcher Noye has been particularly vocal about moving ahead anyway and overruling my sound reasoning. I found I could no longer disregard the consequences we might create due to factors we cannot anticipate. I could no longer ignore my “gut”, as you say. Logically, the strongest statement I could make was to resign in protest.

Captain Nog made a final appeal to me to stay. I believe he has reservations as well. The nature of my transfer request allowed him to insist on additional simulation testing over Krenim objection. In that way, perhaps I helped. I have recommended that Nog call in the officer I worked with at the Turei colony, should he need additional assistance. Nog has agreed they are an excellent asset.

Time alteration may still hold a key, given the Iconians’ weaknesses, but it is a technology requiring precise mastery we do not have.

There was a brief detour on my return trip to the Sol system. The Krenim weapons test was halted by the apparent failure of a temporal incursion. I understand there is a temporally shielded core with data. I have made the appropriate requests to gain access, but Researcher Noye is proving to be uncooperative.

Captain Paris has insisted this is the perfect time to engage in the Human tradition of the "I told you so." I have reminded Captain Paris that Noye is not Human and the cultural nuance would most likely be lost.

I find I am both relieved and anxious. With Temporal Alteration experimentation on hold, there will be no more ill-advised incursions. However, one has already happened. We may never know of how much we have lost already.

I will be in the Sol system soon. I look forward to seeing you and assisting on your current projects to help the war effort.