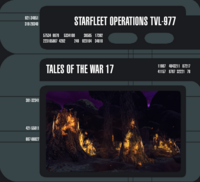 Doctor Cratak stepped carefully through the dark but immaculately-maintained foyer of the household, then checked her hand scanner again. Movement once more – a lone person racing through a back hallway, heading toward the entryway; then suddenly, nothing. Cratak felt a momentary surge of elation followed by disappointment, but while another Romulan might have shouted or struck the wall in frustration, she kept her emotions subdued under years of experience. This wasn’t the first time that they’d failed to arrive in time to stop a Herald abduction, and doubtless it would happen again before the war ended. Even here on New Romulus, in the hinterlands where only a few hardy colonists had chosen to settle, the Heralds came without warning.

Cratak put the hand scanner back into standby mode and closed her eyes. Behind her, Lieutenant Terel let out an indistinct growl, almost like a Klingon. The security officer waved with her free hand while keeping her plasma pistol trained on the door, and two of her subordinates advanced to the central hallway of the household, keyed the door open, and pointed their weapons down the darkened and empty corridor.

The house remained quiet and still, except for the sounds of the tactical team. No lights came on – the entire EPS control assembly for the southwest face of the house had been overloaded earlier, during a firefight with a Herald thrall.

Terel, in her typical stubborn fashion, refused to take that as the end of the matter. Her pair of tactical crewmen advanced through the house, covering doorways with their weapons and crouching near furniture. Terel followed behind them, then stormed into the back hallway with pistol in one hand and grenade in the other. The door for the back bedroom opened with a momentary shudder, and a squeaking, bleating noise emerged.

Terel checked the corners of the bedroom, then straightened and holstered her pistol. “Just an epohh,” she said. The tactical crewmen moved back through the house, checking the disheveled kitchen and the empty master bedroom, but no-one else remained.

While Terel paced back and forth along the back hallway, Cratak regarded an end table holding a piece of abstract art. To her it looked like a sculpted flame, stylized into smooth curves reaching upward to a narrow apex. What did it represent? To the family that once lived here, it had some kind of meaning. Now that meaning was lost, along with the people who’d called this home. The whole house was hollow now, empty – like the whole galaxy was in danger of becoming. She picked up the piece and traced her fingers along one of the smooth curves. It was cold to the touch, carved from some kind of native stone, a pale green shade, almost like skin, but without the warmth.

One of the tactical crew returned from finishing a sweep of the house and, with a stiff military posture, reported to Terel, saying, “Finished checking the rest of the house. Didn’t find any shielded storage or panic room – nowhere to hide from scanners or intruders. It’s empty. No reason left for us to stay here, sir.”

Terel nodded, though she remained displeased. She turned to Doctor Cratak and said, “The Heralds have already come and gone. I don’t think we’re going to catch any more in this part of the mountains. We should return to the Lleiset and wait for another signal.”

Cratak nodded once, thinking back to the many conflicts she’d seen as an officer and a doctor for Romulan starships for decades. Enemies that you couldn’t see were one thing: The cloaking device made that a natural tactic for Romulan naval vessels. But enemies who appeared in the middle of the night, whisked away your family and your children, and vanished to some place millions of light years away – it had an uncomfortable similarity to the tactics of the Tal Shiar. Dark nights, with innocent people vanishing without a sound. Carried off to unknown places, never to return. No argument, no negotiation, no faces, just terror.

Cratak put down the statuary and tapped her communicator. “Cratak here. Ready to beam the team back. There’s nobody left… just the animals. All the people are gone from this settlement.”

The dipping whine of the transporter sounded in reply, and she was whisked away to oblivion.