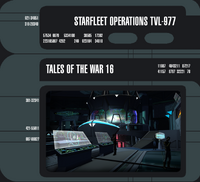 "We destroyed Romulus. Again," Adranna said, rolling her eyes. She moved to the replicator in the corner of the room. "One spice tea, hot, and one Vulcan mocha, half sweet." When the cups appeared in a sparkling swirl of electrons, she passed the mocha to the Vulcan male at the table.

"That is the six hundred and eighth time you have encountered that result," Sann responded.

"Does that mean we quit trying?" Adranna asked.

"Perhaps it means that your mission parameters are in error."

"I'm trying to restore an entire planet. There are going to be a few setbacks."

Sann paused to think. "I understand that you and many of the Republic team greatly desire the restoration of your homeworld," he said. "But the purpose of this project is to use time alteration to end or delay the Iconian threat. Not to completely rewrite the past."

"The Iconians gave Hakeev and Taris the device that caused the Hobus supernova," Adranna argued. "Their first shot in this war wasn't when M'Tara appeared on Qo'noS or when the Elachi started stealing people from colony worlds like Virinat. It was much, much earlier. Why shouldn't we try to restore all we've lost?"

"I have made a detailed study of the records left behind by the Krenim inventor of this technology," Sann said, sipping his drink. "Annorax, wished to restore something very specific that the Krenim had lost. In his later writings, he speculated that time itself was fighting against him."

"Time fighting against him?" Adranna scoffed. "That doesn't happen."

"I agree that attributing emotions and motivation to something that cannot possibly exhibit them is not logical," Sann said. "But there is much about time alteration we do not yet understand. There may be much that we are not capable of understanding."

"I refuse to believe that there is anything we can't do," Adranna said. "We can restore everything. We just need to find the right combination of alterations."

"Then it is fortunate that you are testing your calculations in the holodeck," Sann said, standing up and taking his empty cup to the recycler. "Before you destroy your homeworld for the six hundred and ninth time."