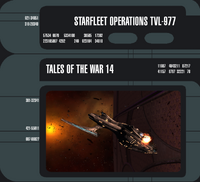 When I close my eyes, all I see is wreckage.

I'm sorry. I'm so, so sorry. There are hundreds of people I'd like to apologize to who will never have the chance to hear my meaningless words. And the letters we send to their families are cold comfort at best.

We had to do something. The Iconians are winning. Their Heralds are moving beyond military targets now to civilian populations. They're trying to force us to bow to their rule … but kneeling is not in our nature.

So we pushed back. We gathered every ship we could muster and attacked. And we failed.

Oh, there are some in Starfleet Command arguing that we had a partial victory. The Iconians have lost their leader, and we've proven that the Iconians are not immortal. But it was a pyrrhic victory. So many lives lost to take just one …

And, if anything, it has only strengthened the Iconians' resolve. Instead of cutting the head off the snake, we gave them a martyr.

Herald attacks have increased by 36 percent in the last 78 hours. And now Heralds of L'Miren are joining the fight, so they have fresh reinforcements where we have battered and outnumbered ships.

How do you fight a war when more than twenty percent of your officers are in sickbay? When more than a third of your fleet is either destroyed or disabled?

The only thing I can think to do is change tactics. We rejected the Krenim ship because it would take too long to build. Because the questions of time alteration are too thorny. Because there should be lines we shouldn't cross. That we can't cross.

Those lines seem hazy today. If the choice is morality or destruction, I fear that many even in Starfleet will choose the option that gives us a chance to see tomorrow.

What will I choose?