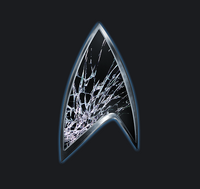 So much for a quiet night shift, Lieutenant Jirelle Kav thought. Around her, she felt the emotions of the bridge crew flare like beacons. Stress. Worry. Anxiety. Resignation.

"Attempting to compensate, sir, but there's a lot of interference." Ensign Marissa Kell said. The red-haired human worked at her console, but all that came out of the speakers was more static. Then the transmission cleared briefly and the sound of weapons fire and the wail of an alert beacon filled the Enterprise's bridge.

"Keep trying to hail them," ordered Kav. "Helm, how long to their location?"

Ensign Kell worked her console. "There are a couple of freighters and the U.S.S. Day in range. But she's a Miranda, Lieutenant. She's not going to have much more luck than the Treva."

"Every bit helps," the Betazoid said. "Contact the Day and ask them if they can render assistance until we arrive." She touched a control on the center seat of the bridge.

"I'm sorry to wake you, Commander, but we've picked up a distress signal."

"Tell me it's something easy like a warp core breach."

There was a pause. "On my way, Lieutenant."

"Do you want me to notify the captain?"

"No, no," Winters responded. "I'll contact him when we're on site. Winters out."

Most of the senior staff had been making a concerted effort to give the captain some down time. Captain Shon hated it … but even he admitted that his 36-hour shifts on the bridge weren't healthy.

After days of pointed remarks from Savel, the ship's chief medical officer, and repeated offers from the Enterprise's first officer to shoulder more of the burden, it had taken a blunt intervention from Counselor Mathias to convince the captain to relax his hold on the reins.

Kav rose out of the center seat as Winters entered, still tugging on his uniform jacket. She relieved Ensign Kell at Ops, and Kell moved to the empty communications station.

"Give me a sit rep," Winters said.

"No further signals from the freighter, sir," Kav said, "and we haven't been able to get a comm signal through. The U.S.S. Day is four minutes out."

"The Treva did launch some, Commander. There's a chance for survivors."

It was a slim chance, Kav thought. The Heralds were attacking any target they could reach now. The Alliance was holding onto key worlds, and even managing a few victories, but the best they could do is try to hold the line.

And she was so tired of finding empty escape pods.

"Then into the breach once more," Winters said. "Prepare to engage hostile ships as soon as we drop out of warp."