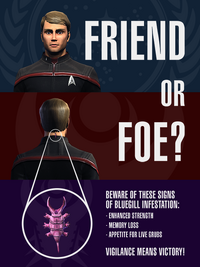 "Without sufficient plasma distribution, the weapon will be able to fire twice, at the most, before the energy cells are damaged beyond repair." Seven pointed to the master systems display. "We need to redesign the EPS to compensate."

"If we pick the right target, we only need to fire it once," Noye snapped. "Stop wasting time!"

"Your logic is flawed," the liberated Borg announced. "If time is as fluid as you claim, we are incapable of wasting it."

"And while you argue semantics with me, your people are losing this war! The Krenim are still lost! We can fix all of it!" Noye rubbed his head in frustration, a familiar gesture to the rest of the researchers working at the new Krenim facility.

The argument showed no signs of abating, and it was a daily occurrence now. Nog could hear them across the room, and he knew that the bickering was taking its toll on the team. A'dranna was distracted, and Clauda kept stealing glances over at the pair wondering if she should intervene again. And Team Alpha had stopped what they were doing completely to watch the show.

Nog had to do something. The new facility in the Kyana system had the best materials and engineers the Alliance could provide and some of the greatest minds in the galaxy. Work on the ship was progressing, but fitting the Krenim weapon into it – and making that weapon work – was a more difficult task. It didn't help that the team just wasn't gelling. There were too many strong personalities, too many cultural conflicts … and the fact that Noye fought with everyone but his wife didn't help matters at all.

In times like these, Nog always thought of one question. What would Sisko do?

With a tug on his jacket, Nog headed toward his battling researchers.

"Not interested," Nog told Noye. "You have enough to do without trying to do Seven's work too. Or have you found a suitable target yet and just forgot to inform us?"

"I am quite capable of dealing with this issue without assistance, Captain," Seven protested.

"I know," Nog answered. "But this has gone on long enough, and it's distracting us all. Noye is right about one thing. The longer it takes us to finish this ship and build the weapon, the worse it is for everyone. The Iconians won't wait for us to be ready.

"People are dying to give us the time we need."