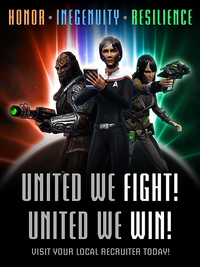 The doctor was in the Lleiset's secondary control room when Lieutenant Gaius Selan entered.

Gaius required little sleep. Many of his Borg implants had been removed, but he retained enough of their technology to benefit more from a few hours in a regeneration chamber than from eight hours of inactivity in his quarters. So he chose to spend his off hours in more beneficial pursuits.

Normally, this meant he would work on his scenarios in the holodeck. His experiences with the Vaadwaur in the Delta Quadrant had proven the value of preparation.

Lately, however, he had set his mind to a different task.Only by working through every anticipated complication could one truly be prepared for calamity.

"You're looking for her, aren't you?" Doctor Rhian Cratak had spent decades in the Romulan fleet before joining the Republic. Gaius respected the older woman. She was one of the few people on the Lleiset who was almost as informed as the chief intelligence officer.

"That is my intent," Gaius said, his voice even and controlled.

"Because you're angry?" the doctor asked. "Angry at her?"

"Anger is irrelevant," Gaius replied. He began to input a complicated series of commands into the secondary sensor array.

"You don't get to pull that Borg routine," Rhian said. "Not with your doctor."

"I am not in need of a physician at this time."

"I disagree. You might be physically fine, but … I've been keeping an eye on you since you … returned." Rhian's voice turned soft. "My family is gone, Gaius. But you, the commander, everyone on this ship … you're family now. And I can't stand by when my family is hurting."

"I … I could not resist. But I knew what I was doing was wrong." Gaius said. "It was worse than … worse than before," he continued. "At least the Collective does not let you remember."

The doctor put a comforting hand on Gaius's arm. He wondered how long it had been since anyone had touched him. Even among the Lleiset's crew, there were many who were still uncomfortable around liberated drones.

"Sela hurt you, Gaius. Not physically, but … she stole all that you have become. Made you a slave to her will. And she did it because you were convenient."

"I will find her," Gaius said. "I've narrowed the search area down to three sectors. The subspace messages she's sent have helped. If I can return to my work, I can …"

"Don't," the doctor interrupted. "Focus on what's in front of you, Gaius. Not the past. Wounds don't heal if you keep opening them."