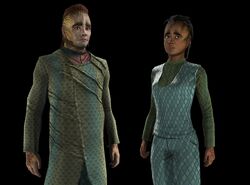 Talaxians are a humanoid species native to the Delta Quadrant and members of the Delta Alliance. Lifetime subscribers to Star Trek Online can also create Starfleet- or KDF-affiliated, playable Talaxian characters.

Usually a very sociable people with a love for food, stories and humor, many Talaxians left their homeworld when it was conquered by the Haakonian Order in 2356 after a bloody war. In 2371, the Talaxian scrap trader Neelix joined the crew of the U.S.S. Voyager until being dropped off 7 years later at an asteroid colony his people established tens of thousands of lightyears away from their original home. He became the leader of the community, which grew from 500 to 3,000 members and had relocated to a different asteroid in the Entaba System by 2410. As the crowded colony is no place to raise children, the Talaxians seek to re-establish a permanent home on a real planet. 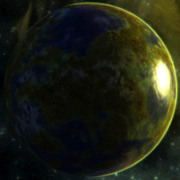