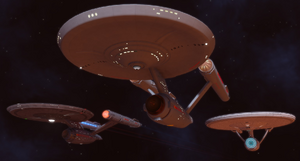 The Federation Constitution-class starship is a set of starship classes from the 23rd century which include the U.S.S. Enterprise as its most famous craft. It comes in three distinct variants relating to Star Trek: The Original Series, Star Trek (2009) and Star Trek: Discovery.

See the template to the right for a list of playable starships and NPC vessels in Star Trek Online based on the Constitution. Unlike most class groups, the three distinct branches of the Constitution are separate in terms of parts.