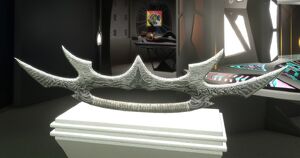 The Sword of Kahless

"There is no greater weapon in our history. With the Sword of Kahless in my hand, I could face an entire fleet and win!"

The Sword of Kahless was the first bat'leth, forged by Kahless himself in the 9th century in order to slay the tyrant Molor, push back the Fek'Ihri to Gre'thor, skin the serpent of Xol and force his brother to return to the path of honor.

According to legend, Kahless and his lover Lady Lukara fought off 500 Fek'lhiri alone at the city of Qam-Chee after the city's garrison fled in fear. After the battle, Kahless knew he would need a mighty weapon to defeat Molor. His father's sword was lost, thrown into the sea by his treacherous brother Morath.

Kahless left Qam-Chee's defense to Lukara and went into the mountains. Deep in the wilderness, he reached the Kri'stak Volcano, where no Klingon had ever been. There: "at the volcano, Kahless cut a lock of his hair and plunged it into the river of molten rock. The hair burned, but then Kahless thrust it into the lake of Lusor and twisted it into a sword. That was the first bat'leth. The sword of honor."

Kahless used the sword to slay Molor and banish his spirit to Gre'thor where he remains imprisoned. ( “Destiny”)

Loss to the Hur'q[edit | edit source]

After the death of the original Kahless, the sword became a revered artifact, held by the monks at Boreth. However the sword was taken by the Hur'q as spoils of war during their conquest of the Klingons in the 14th century.

In the 24th century, the sword was found at a Hur'q outpost in the Gamma Quadrant by Worf, Dax and Kor. Fearing its power in the wrong hands, they left it adrift in space rather than return it to Qo'noS. ("The Sword of Kahless", “Destiny”)

Return of the Sword[edit | edit source]

Kahless with the Sword

By 2408 Emperor Kahless II, a clone of the original, sought a quest to prove himself. Worf, believing his sincerity, revealed the last known location of the sword to him. Kahless returned with the sword, hoping to prove himself to his people. ( “Destiny”)

With the return of the Fek'Ihri and Molor in 2409, there were members of the Klingon High Council who believed it was the work of the Hur'q, and claimed that the Sword of Kahless was essential to defend the empire. However, the Sword was stolen by the Fek'Ihri to be used to summon Molor to the real world. ( “Destiny”)

Kahless recovered the Sword at Boreth and used it to help defeat the Fek'Ihri and Molor. ( “Afterlife”)

Loss to the Iconians[edit | edit source]

The Emperor wielded the weapon in battle against the Iconians. With its blade, and the assistance of House Pegh and Alliance forces, he managed to maim T'Ket - the first time an Iconian had been seen to have been injured.

The Sword on display in T'Ket's "Trophy Room"

However, Kahless was subsequently killed and the sword left behind by the rapidly withdrawing Alliance forces. ( “House Pegh”)

In a bid to inspire the Klingon Empire to join the fight against the newly-reemerged Hur'q, Grand Nagus Rom organizes a group of Ferengi to execute a covert raid on T'Ket's flagship and steal back the sword; the mission is a success and the sword is presented to Grilka of the House of Martok. ( “Quark's Lucky Seven”)

It is also found out that the sword is made out of a Hur'q carapace over four thousand years old. The radiation detected on it helps Julian Bashir identify Havas-Kul as the Hur'q homeworld. ( “Quark's Lucky Seven”)

Using the sword, Martok manages to rally the Klingon fleet to the Alliance's aid at Empersa. ( “Home”)

Martok continues wielding the sword during his subsequent appearances, beginning with the Klingon Civil War. ( “The Centre Cannot Hold”, “The Khitomer Discord”, “Partisans”, “Knowledge is Power”, “Leap of Faith”).

While undertaking trials on Boreth, J’Ula experiences a vision where an unknown figure wields the Sword of Kahless and unites the Klingon Empire. The figure is later reborn as a clone of Chancellor L'Rell ( “Knowledge is Power”, “Leap of Faith”). 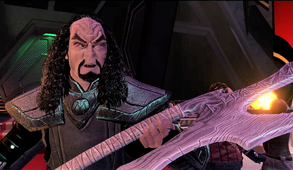 Martok wields the Sword throughout the Klingon Civil War.