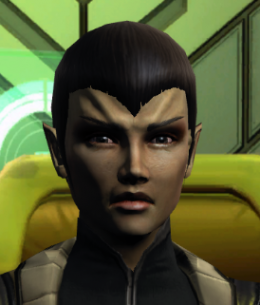 Subcommander Nadel is a female Romulan officer and member of D'Tan's Romulan Republic. She was Commander Temer's aide at the Romulan Flotilla. During

“Turning Point” she took over command of the flotilla and the R.R.W. Deihu.

Although Nadel was born on Romulus, she can barely remember it. Most of her childhood recollections are about her drinking father and her crying mother during the years after the destruction of the homeworld. During this time she realized that a new homeworld is what the entire Romulan people need the most.