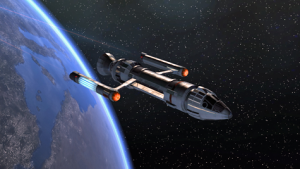 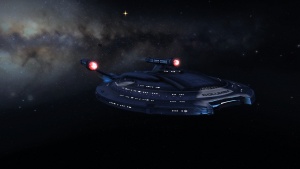 The NX class, the first warp 5-vessel of Earth Starfleet

A Starship is any manned spacecraft capable of interstellar travel via impulse engines (sublight speeds) or warp drive ("FTL", aka faster than light). In Star Trek Online starships represent player and non-player avatars while in space.

While in system space, starships travel at sublight velocities using impulse engines and thrusters. When a starship goes to warp, they travel through sector space.

There are a number of playable starships of various categories in Star Trek Online for Starfleet, Klingon Defense Force and Romulan Republic. A player's choice of ship is crucial in determining their role and capabilities while in space.

In addition to player ships, the galaxy is also populated with non-player character (NPC) ships. Non-player ships serve as mission contacts, vendors, or simply passing vessels conducting their own business. They can also be enemies or allies while in space combat.