This article refers to the 25th century Federation faction. For its 23rd century counterparts, see TOS Starfleet and DSC Starfleet. For general information on the Federation, see United Federation of Planets.

Starfleet is one of playable factions in Star Trek Online. Starfleet is the military, defensive, and exploratory branch of the United Federation of Planets, which is an alliance of more than 150 planetary governments, spread out over 8,000 light years. Notable members of the Federation, who actively serve in Starfleet, include Humans, Vulcans, Andorians and Tellarites. These species work in cooperation to uphold their principles of justice, equality, and rights, as well as expand and share their knowledge and resources for the purpose of space exploration and peaceful cooperation with other races. 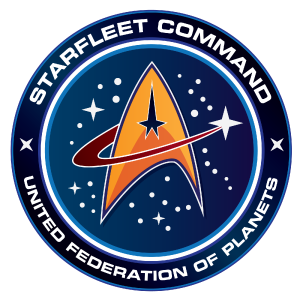 Starfleet's insignia as a combadge

By the late 24th century, the Starfleet deemed the Borg threat had subsided and refocused on exploration. Starfleet also expanded its admission guidelines to accept non-Federation citizens to Starfleet Academy without command-level recommendation.

In the 25th century, Starfleet found itself called once again to its defensive role as the Federation-Klingon War started in 2405. It rapidly found itself embroiled again in multiple conflicts, including the return of the Borg in 2409.

Starfleet's insignia (a variation shown top right) is an asymmetrical, arrowhead-shaped pennant. This features on Starfleet ships, combadges and other ware. However the faction loading screen uses the flag of the Federation (seen in the infobox above) while the faction icon is still a

Starfleet insignias have, at various points in the organization's history, shown the wearer's division in its centre. A star signifies tactical, a stylized spiral signifies engineering and a circle with longitudinal lines signifying science. Note the assocition of these icons, and division colors, differs slightly between Star Trek Online and main Star Trek canon. 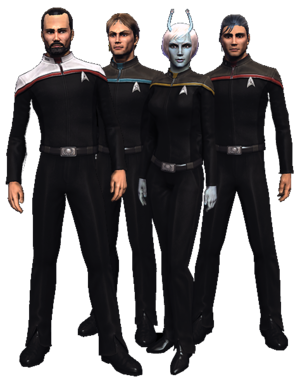 In 2410, Starfleet's uniform is the Odyssey design, although captain's have considerable leeway in the uniform regulations for their crew. Starfleet uniforms are typically color coded to the wearer's division (in Star Trek Online: red for tactical, orange for engineering and blue for science; note that this deviates from canon) while rank is indicated by a series of collar pips (this varies by time period).

Starfleet ranks roughly mirror those of the US navy, with crew being given ranks of Cadet, Ensign, Lieutenant Junior Grade, Lieutenant, Lieutenant Commander and Commander. Ship commanders are usually at the rank of Captain, but sometimes a commander is referred to as Captain even if they are at a different rank. Senior officers hold the ranks of Vice, Rear, Admiral and Fleet Admiral.

Starfleet Command, based in San Francisco, is the fleet's operating authority and answers directly to the Federation President, Aennik Okeg. Starfleet Command runs the fleet's day-to-day operations, with Fleet Admiral Jorel Quinn, based on Earth Space Dock, being the most senior officer encountered.

While Quinn is treated as the leader of Starfleet, notably being shown as J'mpok's opposite at events such as calling the ceasefire, Cryptic's lead writer Christine Thompson has stated that the position of Commander in Chief of Starfleet is a different position, and is being reserved for "someone special" [1].

Upon starting a new Starfleet character, players must choose a career (analogous to a 'class' from other MMORPGs) and a species (or race). The career determines the character's native abilities, and the race determines the character's innate traits, and in certain cases, special abilities. In ground combat, the career choice and racial traits drastically affect the gameplay and strategies used by the player.

When the player completes the tutorial (or skips it), a Starfleet Light Cruiser is assigned to them, which acts as the player's avatar in space and sector space, and is the primary method of combat and interaction in space. The character's career affects the type of gameplay strategies used by the player, as well as the customizable Bridge Officer abilities and ship consoles.

Each profession has its own advantages in the gameplay of Star Trek Online, but does not restrict what playable starships are available, nor the main skill progression beyond a handful of unique abilities and traits.

Starfleet characters have a diverse range of playable races to choose from including long standing Federation members such as Andorians and Vulcans, to Starfleet allies such as the Ferengi and Talaxians. Most races are free to play, while some are paid for.

Each race offers unique traits and abilities which can aid a certain type of play. Once the race is chosen, it cannot be changed so it is advisable to choose carefully.

The Federation includes hundreds of members, with non-playable species in-game including the Aenar, Deltans, Denobulans, Ithenites, Risians, Violaceans and Zambeans. Dozens of other non-Federation species have been seen to serve in Starfleet including Capellans, Ktarian, Xenexians and Photonic lifeforms to name a few.

There are three main types of playable Starfleet vessel, each with numerous sub-types for different ranks and styles of play, and each of those sub-types with a number of cosmetic variants. The types of vessel are generally biased towards a specific class, but players of any class can captain any type of vessel.