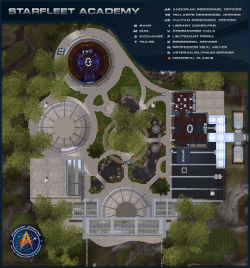 Note that compass points relate to the in-game map, not real-life Marin County

Starfleet Academy is the collective name of Starfleet's training facilities located in San Francisco, Earth. It was officially established in 2161, with the main grounds located in Marin County. To the southwest of the academy is the Golden Gate Bridge (rebuilt after the devastating Breen attack of 2375), whilst to the south across the strait lies Starfleet Headquarters, the Presidio, and downtown San Francisco. The academy motto is Ex Astris, Scientia meaning "from the stars, knowledge."

New players of the Federation start at Starfleet Academy. After the tutorial, the Academy can be accessed from the Sol System or Earth Spacedock and serves as a social map and as a door for Foundry missions. There are mail, bank, exchange, and tailor services. Numerous cadets and professors roam the campus grounds.

Located to the southeast of the academy grounds and cannot currently be accessed.

The main building is located to the east, and is home to: the Club 602 (north); Holodeck 1-3 (in the east, where you can access mission logs); and the Office (south).

Located to the south of the academy grounds and cannot currently be accessed.

Located to the southwest of the academy grounds and cannot currently be accessed.

An unnamed circular building located to the northwest of the academy grounds became accessible in Season 5.

In the alley to the rear of the building: 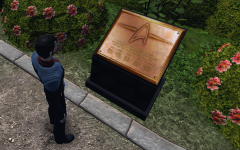 One of the many memorial plaques

Scattered around the Academy grounds are several memorial plaques that refer to prominent events and people, associated with the Academy compound.

The accolade "In The Garden" and player title "Boothby's Favorite" are rewarded for scanning all seven of the plaques. The plaques read:

Starfleet Academy is the first location on Earth that was made accessible in Star Trek Online. Before that, only locations in Earth orbit could be visited.

A frequent complaint from new visitors to the Academy is of the grayed out Beam Up button near the minimap. Since a wide choice of beam to locations exist, a special Beam Out button is provided, normally at the lower right of the screen. New Visitors may need to move away from any being or object for that button to show up.

The apparent location of the Academy grounds is actually in Marin County, slightly to the north of the City of San Francisco, on the opposite side of the Golden Gate Strait. (Marin County and the City of San Francisco occupy the two peninsulas which separate San Francisco Bay from the Pacific Ocean, and which are linked by the Golden Gate Bridge.) This explains why the city is visible at the far (southern) end of the Golden Gate Bridge in-game. (That the visible, farther end of the Bridge is the south end can also be recognized by the mass on the shoreline slightly below and to the left of the Bridge, which is probably Fort Point.) However, the compass points given earlier in this article, as well as the orientation of the in-game map, are not consistent with this fact.