Tuterians after their transformation into notorious Sphere Builders

The Tuterians (also widely known as Sphere Builders) were a humanoid species native to the Delta Quadrant.

In the 2390s they attempted to replicate the work of the Solanae to protect themselves from the Borg Collective. Their attempts were disastrous, and drove the species to near extinction.

In the 2390s, Tuterians replicated the work of the Solanae to protect themselves from the Borg Collective.

By 2410, they had close relations to the Krenim Imperium for several years, and assisted the Krenim after the Imperium fell to the Vaadwaur Supremacy. One member of their species, Clauda, assisted the Delta Alliance in the construction of a Krenim weapon. With her help, research teams came up with a tactic which would delay the arrival of the Iconians for 700 years.

The usage of the Krenim weapon resulted in the creation of a new timeline where Tuterians failed to adapt Solanae technology to save themselves from the Borg. ( “Butterfly”)

Kelvin Timeline Klingons, one of the species used as a proxy-force by the Sphere Builders.

In the 2390s, most of the Tuterians became assimilated by the Borg Collective. After failed experiments with Solanae technology, which changed them drastically at a molecular level, survivors fled into subspace.

Changed forever, Tuterians started searching for ways to make Normal Space habitable for them again. They started constructing large Spheres in an effort to reconfigure space. As a result, they've become known as Sphere Builders. ( “Time and Tide”)

In their pursuit of a way home, Sphere Builders devastated whole universes and exterminated millions of species. In order to protect sphere networks from enemy attacks, they often employed local races, such as Xindi and Klingons, as proxy-forces. During their experiments, they were contacted by an "Envoy" who recruited them into the Temporal Liberation Front. Assuring them that the Galactic Union was behind their plight, the Sphere Builders joined forces with him.

With the Envoy's assistance, the Sphere Builders were able to start reconfiguring their own universe, sending a large number of spheres thousands of years into the past, which would start forming an area of space that would soon become known as the Delphic Expanse.

Wanting to assure that the Temporal Liberation Front wins in a decisive battle at Procyon V, the Sphere Builders tried to manipulate the Xindi from the 22nd century into destroying Earth. They believed that without Earth, the Galactic Union would never be formed. Their plan failed, as the United Earth Captain Jonathan Archer managed to assure the Xindi that the Sphere Builders were not their protectors, but a threat for the whole universe. He managed to destroy their sphere network and to prevent them from gaining a foothold in normal space.

A similar event took place in the Kelvin Timeline, where local Starfleet forces, assisted by vessels from the original timeline, ended Sphere Builder experiments by bringing down the Command Sphere. ( “Terminal Expanse”)

It is unknown whether the Sphere Builders continued with their experiments after the destruction of their network at Procyon V. ( “Ragnarok”) 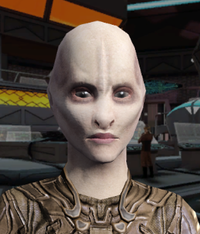 With some assistance from the individual known as the Envoy, the Sphere Builders became masterful manipulators over space and time. Forced to fight for survival, they used that knowledge to build powerful vessels which could protect their sphere networks from Galactic Union attacks. Equipped with modified antiproton and chroniton weaponry, as well as wide range of temporally-oriented abilities, these vessels are capable of defeating any foe that crosses their path.