Temporal starships used by the Federation in the Battle of Procyon V in 26th century. 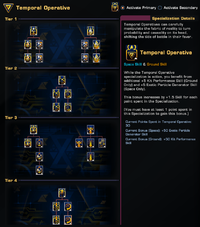 Temporal Operatives can manipulate the fabric of reality to turn probability and causality on its head, shifting the tide of battle in their favor.

While the Temporal Operative specialization is active, you benefit from additional +5 Kit Performance Skill (Ground Only) and +5 Exotic Particle Generator Skill (Space Only).

This bonus increases by a +1.5 Skill for each point spent in the Specialization.

Any Tactical, Engineering or Science Bridge Officer can be trained in Temporal specialization by using the [Specialization Qualification - Temporal Operative]. Said item is unlocked for crafting in the Officer Training R&D School once 10 points have been spent in Temporal Specialization, or may be purchased from the Exchange.

Temporal Operatives use their understanding of temporal mechanics to cause subtle fluctuations in localized causality, primarily manifesting in the form of a mechanic known as Entropy which they generate on foes, then consume to improve subsequent effects.

Most of the Temporal Operative BOff abilities can be classified as either a Builder or a Consumer, depending on whether they increase Entropy or consume it. Using the Builder abilities, you can apply to each foe up to a maximum of five (5) applications of Entropy. Activating the Consumer ability will consume all of the Entropy applied to the foe, increasing the damage output of the ability.

The following playable starships can be classified as Temporal Starships:

Temporal Starships are capable of making subtle alterations on the molecular level through the use of Molecular Reconstruction.

This technology allows the starship to assume 1 of 3 different Configurations: Offensive, Defensive and Support. Additionally, the player may choose to have no active Configuration. Each Configuration has its own strengths and weaknesses.

Once the meter is full, Molecular Reconstruction Beam becomes available for use.

Each of the Configurations generates their own specific counter. A ship may have up to 6 Configuration Counters at a time. After reaching 6 counters, any additionally generated ones will be lost. These counters are used to fuel Molecular Deconstruction Beam:

A large number of playable Tier 6 starships come with either an Ensign, Lieutenant or Lieutenant Commander Temporal Operative BOff seating. However, these ships lack the built-in Active Sensor Arrays, and are thus not considered to be Temporal Starships.