This NPC vendor has been removed from the Q's Winter Wonderland map and its weapons were transferred to the main vendor Holiday Item Vendor from the same map. 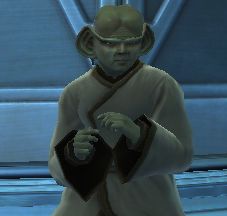 The Special Weapons Dealer is a green-skinned Ferengi vendor with a small stature. At Q's Winter Wonderland he gives away Nanopulse Edge Bat'leths and Nanopulse Edge Lirpas for free. His catchphrase is: "Rare as latinum good customers are. Treasure them you should."