For an overview of all social/adventure zones and their facilities, ground and space, see Hub.
Starbase redirects here. For the fleet holding, see Fleet Starbase. 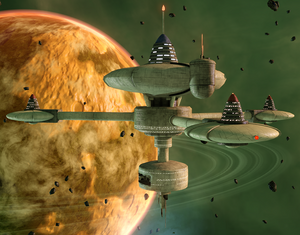 A Space station is a stationery, artificial structure in space usually designed to support a crew at a specific location. They serve as support stations for starships, observation posts and defensive installations.

For an exhaustive list of space stations, see the Hubs template at the bottom of this page.

Space station is used as a general term for any stationery space facility, but there are a number of related, more precise terms;