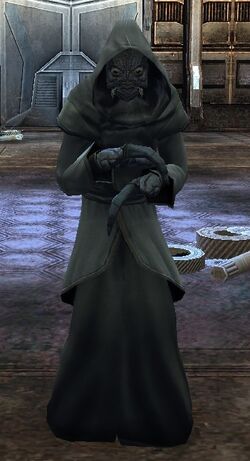 The Solanae are a mysterious race of humanoids whose molecular structure is based on solanogen, a substance that is only stable in subspace. They reside in a tertiary subspace manifold, and cannot survive unassisted in normal space.

The Solanae serve the Iconians as a scientist caste, and will often abduct and study other lifeforms for an unknown purpose, sometimes conducting lethal experiments on those they capture.

The Solanae are vaguely humanoid, characterized by bulbous eyes, beaks, and clawed, three-fingered hands. Most of their bodies are hidden by hooded metallic robes. Their language consists of a series of rapid clicks.

In 2369, the Solanae discover the U.S.S. Enterprise-D when new sensor modifications allow the Enterprise-D to scan deeper into subspace. Drawn by the sensor signals, the Solanae began to secretly abduct numerous crew members from the Enterprise-D and perform experiments on them. They attempt to create a pocket of their native domain aboard the Enterprise-D by causing an expanding spatial rupture that threatened the ship. The rupture is eventually sealed with a graviton pulse but not before the Solanae can send a burst of energy through into normal space. 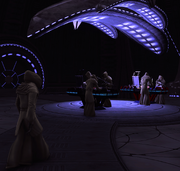 A group of Solanae experimenting on Commander Maiek and Captain Shon.

The Solanae outpost in subspace. 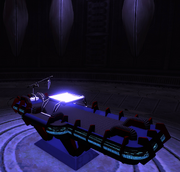 An examination table used by the Solanae to experiment on other humanoids. 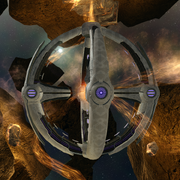 The Solanae use similar technology and tactics to the Elachi, such as the way they transport people from normal space into subspace and the experiments they conduct on people. This is due to both races being servitor races for the Iconians.

The Solanae are a technologically advanced race that uses automated drones, has the ability to manipulate tetryon particles, uses invasive medical technology and has the ability to transport individuals from normal space into their subspace domain for study. They also constructed the Solanae Dyson Sphere which is capable of traveling vast distances across the galaxy through subspace, this "jump" ability fueled by Omega molecules generated by the Sphere. It is likely that the Solanae also constructed the Jenolan and Andromeda Dyson Spheres as their internal architecture is the same as that seen in the Solanae Sphere.

They have a close relationship with the Iconians, acting as scientists for the Iconians and bio-engineering the Neural Parasites for the Iconians to use as a means of controlling other races. Storage Facility Z98 has the ability to reset the entire Iconian gateway network, implying the Solanae also understand the technology behind the gateways.

The Solanae also maintain starships such as Obelisk 1, and field enough to potentially turn the tide of the Iconian War if brought to bear.