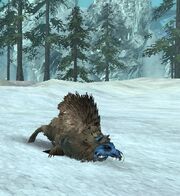 So far, Snow Possums have been encountered in Q's Winter Wonderland only. They live in the hibernal valley amidst snow-covered mountains and trees. This place is also populated with Snow Mastiffs and humanoids participating in Q's “Fastest Game On Ice”. 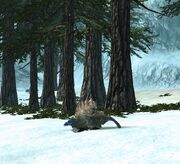 Snow Possums have a blue skin underneath their brown fur. Visible portions of skin include the face and ears. The head looks like those of Jackal Mastiffs, featuring the distinct hypertrophied tooth curving downwards from the front of the snout. While the face is generally similar albeit wider compared with Mastiffs the body is smaller and compact. Their four paws are large and clawed. Snow Possums also have a flatter tail than other mammalians but longer and more pronounced hackles.

Snow Possums in the Wonderland do not stick together and ignore both Snow Mastiffs and Q's guests. Currently, only one type is known.

The Snow Possum does not display any special powers.