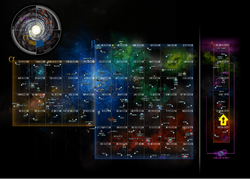 The Shivolia System is a system located in the Markonia Sector of the Delta Quadrant.

The Shivolia system is home to a species known for their joviality and welcoming spirits. Shivolians travel throughout the quadrants as entertainers and crew members on trading ships, spreading their warmth and good spirits wherever they go. The Shivolian government nominally gives its allegiance to the Hierarchy, but the relationship is a loose one. The Hierarchy find the Shivolians lack of interest in profit puzzling, and the Shivolians believe that while joining together with other species to achieve shared goals is a good idea, they're not sure the Hierarchy leadership is committed to the common good.