Different ships will have different resistances to each damage subtype depending on hull plating and engineering modules equipped, if any.

A weapon's firing arc is the angle of view, measured in degrees (°), inside which an enemy ship must be located. Targets outside of this arc cannot be fired upon by the weapon; you must turn so that the target is within the firing arc in order to fire. (Note that the firing arc for aft-mounted weapons is measured from the rear center, as opposed to the front center for fore weapons.)

You can preview a weapon's firing arc by holding the mouse cursor over that weapon's icon on your action bar. The firing arc only represents the angle at which the weapon can fire; it does not represent its range.

The following table shows the firing arcs of each weapon type in Star Trek Online: 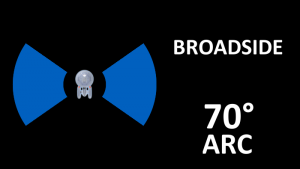 Shows the region of overlap with beam arrays fore and aft. 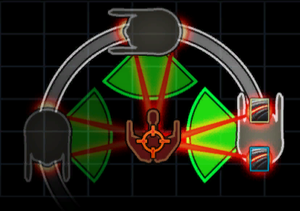 Players who prefer beam array weapons favor the broadside technique, and will often circle their target, keeping them within the broadside arc at all times.

A vessel that equips Beam Arrays both fore and aft is most effective when firing from the Broadside i.e. either the port or starboard side of the ship. This is because the 250 degree firing arc of beam array weapons means that there is region where the forward and aft firing arcs overlap. As such, a ship can fire both fore and aft weapons at a target within that overlap region. As the ship is effectively moving sideways relative to the 70 degree overlap region on either side of the ship, it is easier to keep a target within the optimal broadside firing arc.

Cruisers are best suited to firing from the broadside, as they lack the maneuverability to use weapons with a narrower firing arc. Cruisers also have more weapon slots than other types of vessel at the same tier, and so can potentially deal more damage from the broadside. In a tier 5 or tier 6 Cruiser it is possible to fire eight beam arrays in a single shot to devastating effect, though this causes an enormous power drain.

You can set your weapons to autofire, by right clicking on the weapon icons of your ship in the space battle UI below the "Fire all beams/ Fire all torpedoes/ Fire all weapons" buttons. The icon will have a green outline and the tool-tip should now read "Autofire enabled". The order in which you activate autofire also determines the firing priorities for weapons with shared cooldowns. This is especially important for torpedo weapons. In practice this means the weapon you enable autofire on first, will have higher priority over the weapons you selected last.

There are weapons that make a sphere of damage on impact. If otherwise mentioned, the impact affects every enemy currently in the sphere created from the impact point's coordinates. The Advanced Radiant Quantum Torpedo has the highest spherical damage range of all weapons with 10km in diameter.

Energy weapon cycles can be divided into two parts: firing cycle and recharge cycle. During the firing cycle, a weapon deals damage and power is drained from weapon subsystem. On cycle end, there is a weapon lockout for a few seconds during the recharge cycle when no damage or power drain will occur. All energy weapons have a 5-second cycle, and fire thusly:

Torpedo launcher firing cycle is affected by global cooldown and type specific recharge time. Firing a Torpedo activates a recharge time (seen in the table below) before it can be used again. It also activates a shared cooldown of 2 seconds for all slotted Torpedoes. These intervals prevent multiple Torpedoes to be fired at the same time (like Energy weapons are used) and bound them to firing in a sequence.

As the Mark (Mk) level of a weapon increases, it gets a damage boost. The boost is as follows, using the example of a Phaser Beam Array at 100 weapon power:

This damage boost in the same 'category' as tactical consoles and many other boosts, i.e. if you have a Phaser Beam Array that boosts Phaser damage by 25%, simply add that 25% to the total given above.