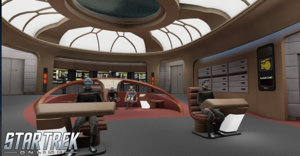 Ship interiors in Star Trek Online provide some added flavour to starships roughly analogous to housing in other MMOs. However, the functionality and customization of interiors is limited and unlikely to be developed to what is typically provided as housing in other games.

In major hubs such as Earth Space Dock the same NPC that customizes the ship's exterior can customize the interior as well as the size of the interiors themselves. The player is free to choose any interior that's available for their ships, so long as it belongs to their factions, including special interiors unlocked from certain ships.

Within certain maps there are some limited customization options to place or hang trophies or Gold-Pressed Latinum.

You can access your currently selected ship interior by selecting the down arrow to the bottom right of the minimap and clicking "Visit Starship Bridge".

From the bridge the player is allowed to do the following;

When the ship interior consists of areas beyond the bridge, access is given via the turbolift network.

An example of a ready room

The Bridge is typically Deck 1 on a starship. It is the focus of the ship's operations and is typically centered on the captain's chair.

Beside the bridge there is often a ready room. The captain's Ready Room is where the captain of a starship waits until he is needed while on-shift, but not needed on the bridge. It contains a desk for the captain to get work done on, a couch upon which the captain may rest, a few trophies of past deeds or mementos to starships gone by - generally speaking, it is the captain's business office.

The computer on the captain's desk allows the player to access diplomatic and military assignments. In the absence of a ready room, this computer will be located elsewhere in the interior.

The Crew Deck is an abstraction for any number of decks upon which the crew of a starship might reside. This Crew Deck contains three main areas: the Lounge, Captain's Cabin, and Sickbay.

Not all custom interiors have a dedicated crew deck. 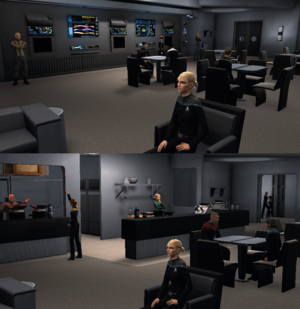 A gathering place for the crew in off-hours, the Lounge may at times be used for some official functions, such as weddings performed by the captain, yet is also frequented by more civilian duty officers, such as counselors, chefs, and bartenders. Certain interiors will have unique variations of the Lounge, such as Ten Forward on a Galaxy class interior, or Mess Hall on an Intrepid interior.

Trophies wall - the Lounge has a considerably larger trophy wall available compared than the Captain's Ready Room, with space for four wall trophies and a floor trophy. To add or change a trophy, click the Setup Trophies button which appears near the central ground pedestal. 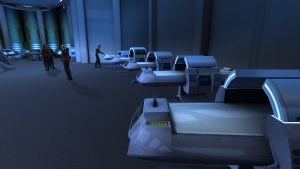 A row of biobeds along the rear wall, with more biobeds available in the rear

Not to be confused with Assignment: Sick Bay.

The sick bay of a starship is where medical personnel care for sick or injured members of the crew, and is also where medical assignments can be undertaken. It includes chief medical officer's office, and a surgical/intensive care area with around a dozen biobeds. 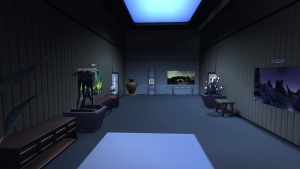 The rear of the Captain's bedroom, with ensuite repicator.

The Captain's Cabin are the quarters which the captain calls their own.

Not all custom interiors have a dedicated engineering deck.

The throbbing heart of any starship, it is within Main Engineering that the starship's Warp Core (or Singularity Core on Romulan starships) is installed, providing primary power generation for all of a starship's functions.

The Chief Engineering officer gives access to engineering assignments, some of which can reward components, Mk XII consoles or turret prototypes. Colonial and some trade assignments are available by the Operations officer, and this also goes for assignments of the Colonial chain. 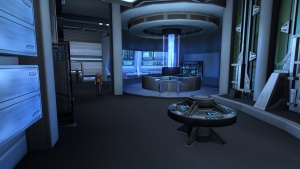 The view from the lab's rear.

The Engineering Lab — formerly known as the Science Lab — is focused on many pursuits of knowledge in general, science included, and offers many unique assignments. This includes things like tribble breeding, adapting Strange Alien Artifacts for various purposes, and using large quantities of data sample types for purposes other than crafting.

A ship's Transporter Room is where crewmembers, including the captain, are converted to energy and re-materialized to another location, be it a starbase or the surface of a planet or another ship. Occasionally, crewmembers will walk onto the transporter pad and beam themselves elsewhere, and sometimes crewmembers will likewise materialize on the pad from parts unknown. The player who owns the ship will also find an NPC in this area that will let them switch to a shuttle.

In addition to the standard Account Bank access and Duty Officer Assignments, some ship bridges will include features typically found on starbases or other hubs, such as the Tuffli Class Freighter, Suliban Cell Ship and Ferengi D'Kora Marauder. Other players invited onto the bridge of said ships can also make use of these services.