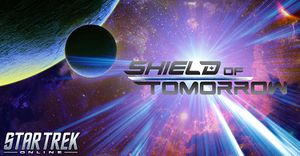 Shield of Tomorrow was an actual play series produced by Geek and Sundry in which a group of roleplayers played a campaign set in the Star Trek Universe, using Mophidius’ Star Trek Adventures system.