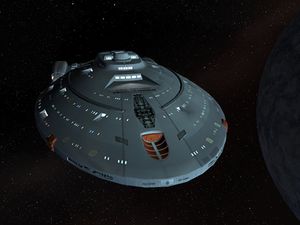 U.S.S. Voyager in the Turei System showing the Secondary Deflector

Secondary Deflectors are a type of starship equipment which interact with Science Bridge Officer abilities. There are several types of Secondary Deflector, each with a different effect, which are detailed below.

The effect is triggered whenever a Science Bridge Officer ability is used. Engineering, Tactical and Specialization bridge officer abilities cannot proc the secondary deflector's effect, even if they have control, debuff or support effects, nor can any non-bridge officer ability. Of the 23 existing Science boff abilities as of this writing, most will proc the effect of one of the three types, except two[1]:

Available from the Competitive Wargames reputation system after reaching Tier II, Competition Secondary Deflectors come in the same 3 types as the standard ones, but instead of one of the usual Very Rare modifiers, they have a passive boost to Sensor Analysis that lowers the (enemy) target's outgoing damage, as well as three standard modifiers' worth of stats at Very Rare quality, meaning they have one more than a standard secondary deflector. At Ultra Rare quality, they all receive a [CtrlX] mod.

Getting your Competitive Wargames reputation to Tier VI will allow you to Claim Account Wide Reputation Gear Discount that reduces all but the Assessed Strategem cost by about half. Additionally, purchasing one Competition Secondary Deflector at the standard/account-discounted price will unlock a Competitive Wargames Secondary Deflectors Discount, allowing you to buy further ones at a reduced price, also about half. These two discounts stack:

Available at the Fleet Research Lab and Fleet Colony World are Secondary Deflectors that also come in the three basic types, but with one of the standard modifiers replaced with a special modifier:

They otherwise function the same as standard secondary deflectors and are available with the same modifier options. See the Fleet Secondary Deflectors for more information, including pricing and unlock requirements.

The Secondary Deflector can be upgraded through the Gear Upgrade System, and requires Upgrade Tokens from the Science School, or Universal Tokens.