Recently, we had the opportunity to interview Craig Zinkievich at Cryptic Studios to discuss Star Trek Online, its current state, and its future.

STOWiki: Who are you and what is your position at Cryptic?

Craig: My name is Craig Zinkievich and I am the Executive Producer for Star Trek Online.

STOWiki: What have you worked on in regards to STO?

Craig: Quite a bit! It’s my job to make sure everyone on the team has what they need to do their jobs to the best of their ability. I also make a lot directional decisions about the game and help build consensus with the other leads on the team.

STOWiki: Congratulations on the launch of the game - Can you tell us about recent content additions, fixes, and things you're already working on since the release a few weeks back?

Craig: We just released some endgame Borg-themed episodes. These aren’t the Borg from TNG, either. These guys are faster, more advanced and even more dangerous than before. We’re planning on releasing more endgame stuff every couple weeks over the next couple months. In addition to all that endgame content, we’ve got some Klingon PvE coming, as well as a tier 2 Klingon cruiser.

We’ve also been doing bug and balance fixes as quickly as we can. We’re taking issues players have very seriously, and have been working round the clock to ensure their play experience is as perfect as it can be.

STOWiki: We have heard that the Romulan Empire and Cardassian Union will each be playable factions in the future. Will these factions be playable right off the bat, or will they have to be unlocked, much like the Klingon Empire faction is unlocked at Lieutenant Grade 6?

Craig: Well we would like those to be playable factions in the future, but we haven’t announced which one we’re working on, if any (yet). We’re still gathering player feedback on which faction they would like to see playable next. So with that in mind, we haven’t decided yet if we’re going to have them unlockable like the Klingons or if you will get them right from the get go.

STOWiki: Which Star Trek races will be available for each of these factions?

Craig: Again, something that is still in the “we’d like to do this” pile. No hard or definite decisions have been made about what faction we’ll do next and what races would be aligned with it.

STOWiki: What is being discussed behind closed doors in regards to adding new sector blocks, sectors, systems, and other areas to explore?

Craig: Let’s just say there are many discussions going on about adding new and exciting things into STO. More exploration, more playable factions, more systems and more interaction on your ship. These are just some of the things we’re discussing/working on at this moment. We’re also gathering player because we want our community to have input on what makes it into the game further down the road.

STOWiki: Are there plans for introducing new forms of in-game currency, such as gold-pressed latinum or other alien currency?

Craig: At this time, we’re pretty happy with energy credits and merit/honor. Adding a third currency would make the system more confusing. STO is already a pretty complex game, so adding another level to that system wouldn’t be ideal. That, and how would things convert? It would be interesting to see a currency futures market develop, but I don’t think we’re going down that road any time soon.

STOWiki: How do you respond to critics who claim that Star Trek Online features too much combat and destruction and not enough diplomacy and peaceful missions in the game?

Craig: We’re constantly adding more exploration, and more diplomatic missions. However, this is a time of war in the galaxy so that means there is going to be combat. But we do understand that in Star Trek there is a lot of exploration going on and a lot of diplomacy involved. So we want to give players the ability to do these things, explore new lands, seek out new civilizations, and resolve things peacefully, but at the same time protect the galaxy from a whole slew of dangers it’s never faced before.

As far as critics go, it’s something that you listen to and take into consideration but if we made the game all about exploration and diplomacy there would be critics saying we didn’t add enough combat in the game and that it’s boring just flying around all the time with no conflict. So a lot of what we do in the future will be about player feedback and if enough player demand something then we’ll put it in the game. 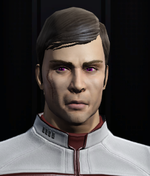 STOWiki: We're impressed by the sheer amount of technological jargon infused into the names and descriptions of consoles, kits, weapons, and equipment in the game. Just how much research did this involve, and how difficult was it to fit Star Trek technology into an MMORPG format?

Craig: Lucky for us we have a bunch of Star Trek fans that love the TV shows, love the movies, love the books, so as a group we have a lot of knowledge about Star Trek. We also have a DVDs of pretty much every piece of Star Trek entertainment in existence, so we weren’t lacking in reference material. Really, when we were designing all this stuff, it just made sense and fit. What is Star Trek without a bunch of techno jargon thrown around?

STOWiki: We've enjoyed the numerous references to Star Trek novels, such as Captain Mackenzie Calhoun from the "Star Trek: New Frontier" series of novels. Can we expect to see other facts, characters, and events from the Star Trek novels make it into the game?

Craig: We try to throw little things like that in the game for Star Trek fans. Maybe it’s a reference to a book, or to a TV show, or to a movie, or to just something general to Star Trek. So yes, I would say you can expect more references.

STOWiki: What's the main focus of the development team at this stage in the game?

Craig: The main focus right now is getting new content out as well as monitoring current gameplay for our users. We’re very much in that post-launch mode where we’re trying to stay nimble, but work on new stuff and tweaking existing gameplay elements to get them just right.

We here at STO Wiki would like to thank Craig Zinkievich for his time and for answering our questions.