Motto: "March beneath the raptor's wings" 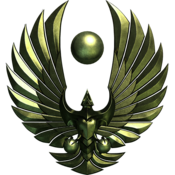 The Romulan Republic is one of the playable factions in Star Trek Online. Born out of the Vulcan reunification movement and the Reman Resistance, the Romulan Republic was formed in 2409 as an alliance of Romulans and Remans who wish to build a peaceful civilization as opposed to Empress Sela's oppressive Star Empire. The Republic is centered on New Romulus, though it also controls several systems and colonies throughout the Beta Quadrant.

Like Federation and Klingon characters, Romulan players must choose a career path (analogous to a 'class' from other MMORPGs) and a species. Neither can be subsequently altered. Later, when the player reaches a higher rank, a new starship must also be selected, which can, however, be changed at any time. 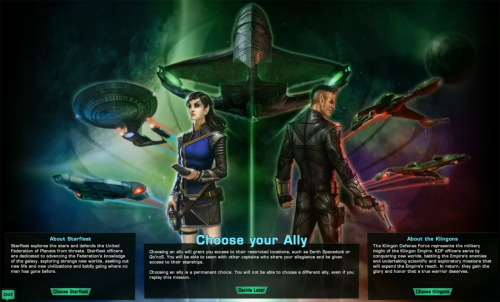 "Both Starfleet and the Klingon Defense Force have agreed to take Romulans into their forces. I'd like you to be the first. You will be our eyes, ears and hands in their fleets. More importantly, you will be our voice. Where you serve is your choice. But wherever you go, always remember that you are Romulan."

At the end of “Turning Point”, i.e. when reaching level 10, players of the Romulan Republic also have to choose an ally, the Klingon Empire or the Federation. Romulan characters will retain their UI, specific storyline as well as their exclusive access to Warbirds, costumes, and certain Republic hubs. However, they cannot build their own fleet starbases and will instead be able to join fleets and teams, as well as visit social hubs of their chosen ally. Republic players therefore have access to more hubs than any Federation or Klingon Empire player.

Romulan Republic characters have a range of races to choose from, each of which offers unique traits and abilities. A player's choice of race is important and cannot be changed, so it is advisable to choose carefully. 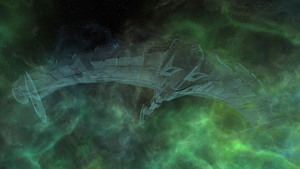 All Romulan Warbirds come with an innate cloaking device

The Romulan Star Empire has long been one of the dominant powers in the Alpha Quadrant. Boasting unparalleled cloaking technology, powerful Plasma and Disruptor weaponry, and the resourcefulness to quickly develop countermeasures for the tactics of other factions, Romulans were a key force in many conflicts since the 2150s.

Warbirds – the most iconic of Romulan vessels – have formed the backbone of the Romulan military for centuries. With the destruction of Romulus, these Warbirds have become a lasting symbol of the once mighty empire’s strength – as well as a new home for some of the many refugees in the wake of their planet’s destruction. 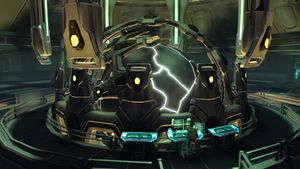 Warbirds are powered by a Singularity Core 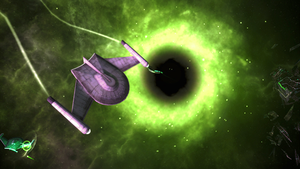 When destroyed, Warbirds leave behind a deadly Singularity implosion

Although Warbirds form the backbone of the Romulan military, there are other ships, exclusive to Romulan Republic, which behave more like their Federation and Klingon Defense Force counterparts. These starships, such as Suliban Flight-Deck Assault Cruiser or Dewan Pilot Escorts, are powered by a classic Matter Anti-Matter Warp Core.

The New Romulans desire to live peacefully, leaving behind the secrecy and deception forced upon them by the Star Empire. Many of the Republic's Romulan population also desires to reunify with the Vulcans, as their two races share a common ancestry. 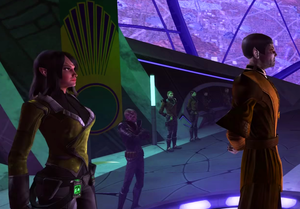 The Romulan Republic has a democratic government. Proconsul D'Tan is the current head of state.

The New Romulans maintain peaceful relations with the Federation, and are also working with the Klingon Empire. The latter sees helping them as a way of conquering one of their greatest enemies without lifting a blade, and it also allows them to devote more resources toward preparing for greater threats.

Despite its peaceful intentions, the Republic is at odds with a number of factions, most notably the Tal Shiar and the Tholian Assembly - Hirogen hunters are frequently sighted on New Romulus as well.

The Republic has access to most of the Star Empire's starship designs. They typically (though not always) use the prefix R.R.W. (Romulan Republic Warbird).