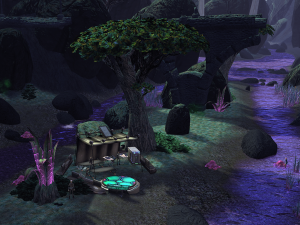 The Atlai, on New Romulus

Romulans who have broken free from the oppression of the Tal Shiar have gathered together on New Romulus to create a new homeworld and a new government. The Republic needs help from their Starfleet and KDF allies to settle the planet and defend it from threats.

The New Romulus Reputation System was released with Season Seven: New Romulus. It focuses on freeing the Romulan people.

The New Romulus reputation contains sets. Set Items can be acquired for

Energy Credits. The following sets are acquired from the New Romulus reputation:

and the title choice "Friend of New Romulus".

The projects in the New Romulus reputation require

Romulan Marks to complete, these marks can be acquired from the following sources:

As well as any content or rewards that grant [Mark Package - Multiple Choice].

Quantum Singularity Manipulation
This trait is an Active Reputation Ability.

New Traits:
Rank II variants of all previous trait unlocks
These are all around 25% more powerful than their Rank I counterparts.

Right click on the box and select "Use" to open.

Unlike later reputations, this equipment requisition is the same across all reputation tiers.

The store contains ground and space weapons, that are purchasable through the New Romulus Reputation with Dilithium

. Prices don't include discounts from the Fleet Dilithium Mine holding.