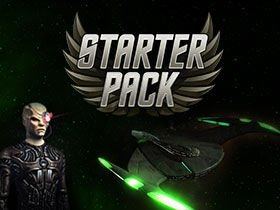 Promotional image for the Starter Pack.

Starting a Romulan captain and want to launch their career at Warp 9? Add a Romulan Legacy Starter Pack and enter the Alpha Quadrant with all the gear you'll need.

Note: This can be claimed once per account. The ship unlocks for the whole account. The other slots and items unlock only for the characters they are claimed on. It may be claimed on a Romulan character, regardless of allegiance. Players must have completed the tutorial to claim this.

What's included in the pack: