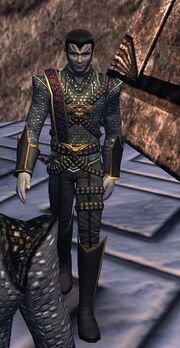 A Romulan Captain strolls through an ancient temple.

Romulan Captain is a high ranking position in the military of the Romulan Star Empire and, besides Commander, the highest ranking Romulan Mob class in-game. Both male and female Romulans serve as Captains whereas their Reman counterpart, the Reman Captain, is men-only. Romulan Captains are distinguished by the ornaments worn on their uniforms. An X-shaped belt runs over their front and back with the Romulan symbol in its centers. In addition, there is a colored drape on the right shoulder. It is green on women and red on men.

Romulan Captains appear, like their Reman counterparts, in only one mission: