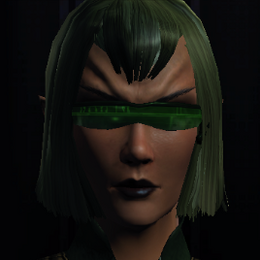 By default, this candidate has tan skin and short straight hair with long bangs, which has been dyed green. She wears a long green intel jacket with gold accents and tall black boots, which are accessorized with a green intel belt, wrist display, and visor. She has Romulan Republic Centurion pauldrons.