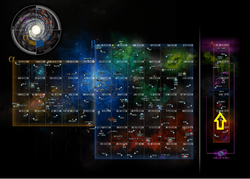 The Rivos System is a system located in the Markonia Sector of the Delta Quadrant.

In the early 2370s, the Rivosians were threatened with extinction. The Borg were coming, and they did not have the resources to resist the might of the Collective. The Rivosians did, however, have some of the best chefs in the quadrant. In the exchange for the secret recipe for zoth-nut sopu, the Think Tank created a plan that allowed the Rivosians to successfully evade assimilation. They continue to make delicious dishes.