River Driclae Pup are native to Mol'Rihan (also more widely known as "New Romulus"). They are naturally docile creatures, lacking any significant defensive mechanism such as claws or an armored shell. Their finely-tuned sense of smell is presumed to be their primary means of survival in the wild, which has the side effect of them being highly fastidious pets as they tend to keep themselves and their surroundings clean and tidy in order to more easily allow for the detection of threatening predators while in the wild. It's easy to see how this trait translates to them being valued domestic pets.

River Driclae are a vivid blue with dark mottling. 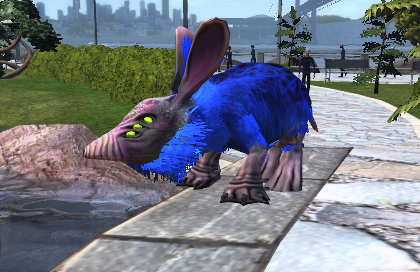 A River Driclae Pup wandering the grounds of Starfleet Academy.